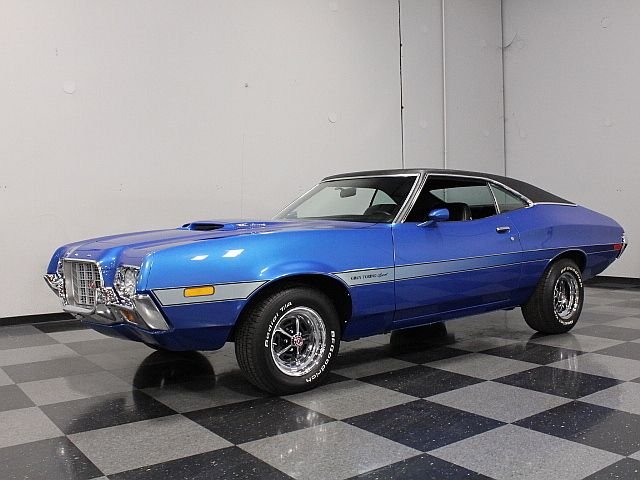 Since Ford Torinos are kind of unusual, let's put this amazing 1972 Torino Sport into context: If it were, say, a Chevelle SS, it would have a sticker $10,000 higher than it is. If it were a Plymouth GTX, it would cost $20,000 more than it does. This car is so nice that it's hard to make people believe it's also incredibly affordable. Did we mention it only has 319 break-in miles clocked so far?

This car was discovered in 2003 in Kentucky. Super straight and clean, it was an original car with a single repaint. Thanks to a mild climate, the body remained in excellent condition, so the ensuing frame-off restoration to the very highest standards did not require major surgery. As many NOS parts as possible were used and given that this is a one-year-only body style, you can understand that many were borderline priceless. The paint is a beautiful bright blue pearl effect that seems to glow from within when the light hits it just right, accentuating the wonderful details of the Torino body. Look at the way it plays over the crease on the rear quarters and highlights the ram air hood, flipping from dark to light. All the chrome and trim was restored to show standards and anything that was missing was replaced with an NOS piece, including the grille surround, which cost a staggering $1100. In fact, we think you'll be hard-pressed to find a visible flaw anywhere on this car. Reproduction decals add the finishing touch and give the big Torino a sporty attitude.

The interior is every bit as nice, returned to factory specs without sparing any expense. A correct front bench has high back rests to simulate a bucket setup and it's been upholstered in correct black vinyl from Dearborn Classics. New carpets, fresh door panels, and a restored dash pad all contribute to the as-new presentation. The steering wheel is aftermarket, but with a Cobra logo, it looks right at home in the big Ford. You'll also note that this car has rare factory A/C, and the system has been fully restored and still uses R12 refrigerant, so it works as efficiently as when it was new. Factory gauges are beautifully refinished, including a tachometer and the gauge cluster took a reported 200 hours to fully restore, with countless hours committed to finding the right stuff – all sourced from several different 72 Torino's until everything was complete. Six cases of Dynamat were used throughout the interior, resulting in one of the quietest and most solid-feeling muscle cars we've ever featured, and there's a modern AM/FM/iPod stereo hidden under the seat so the original AM radio can remain in the dash (it's fully functional!).

The engine is a date-code correct 351C Cobra Jet 4V with 4-bolt mains and built for combat. With TRW forged pistons, 1970 closed-chamber heads, and a Crane Cams valvetrain, it's tough and rev-happy enough to take advantage of the Cleveland's improved breathing. It's beautifully dressed and doesn't pretend to be stock any longer, and you can almost see the painstaking hours that went into its construction. Long-tube headers feed a pair of Hooker Aerochamber mufflers for a wicked exhaust note, and thanks to a rotisserie restoration, it's every bit as nice underneath as it is up top. A built C6 3-speed automatic with a manual valve body delivers lightning-quick shifts and powers a 9-inch full of 3.55 gears on a Track-Lok limited slip. The suspension is all-new, too, and it carries gorgeous Magnum 500 wheels with 255/70/15 front and 275/60/15 rear BFG radials.

The restoration is documented and this car is every bit as amazing as it looks in photos. There's just too much for us to cover here, so if you're a Ford fan who understands rarity and value, this Torino warrants a phone call so we can tell you all the details. Call today! 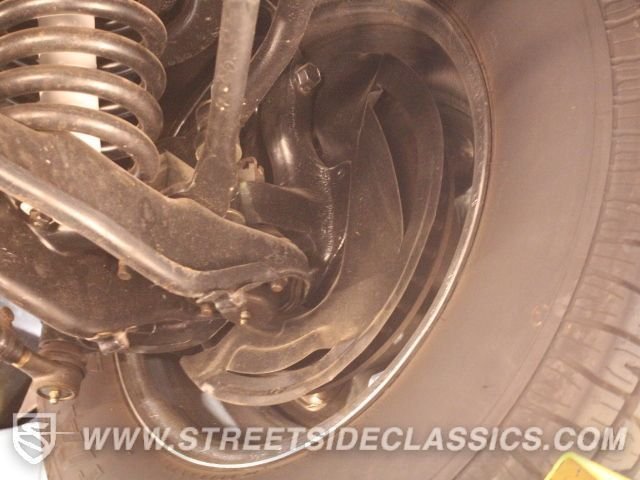