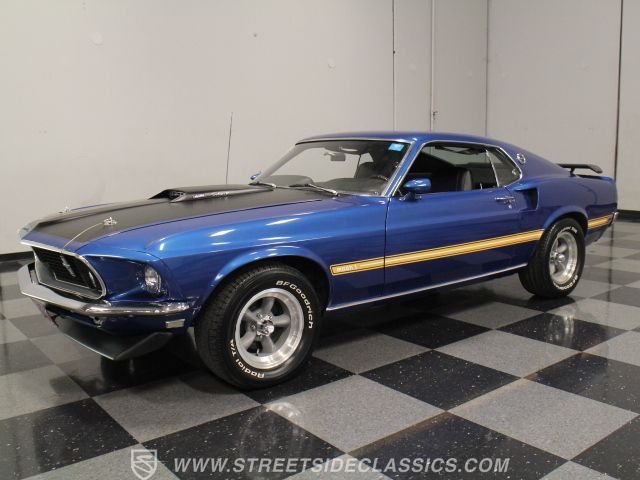 What you're looking at here is one of the most affordable 1969 Mustang Mach 1's with a Q-code 428 Cobra Jet available anywhere. Although born as a 428 Cobra Jet, they did take some liberties with the engine's internals to make it even more potent, so I don't think anyone will be complaining in the horsepower department.

I'm sure the first thing you'll do is check the door tag, and yes, this is indeed a real Mach 1 that came from the factory with both a Q-Code 428 Cobra Jet and a 4-speed. It has also been repainted in correct Acapulco Blue with all the correct Mach 1 markings, including the blacked-out hood, side stripes, and tail stripe. The restoration was finished in the mid-2000s, and it was obviously done to drive, but even then these were rapidly appreciating vehicles, so the work was done well. Mach 1 features like the hood scoop (including the all-important '428' and 'Cobra Jet' badges), front and rear spoilers, and hood pins all give it the right look, and anyone who knowingly tangles with this car on the street shouldn't be surprised when it beats them senseless. Chrome and stainless were all appropriately shined up at the same time and still remain a very attractive contrast against the vivid Acapulco Blue paint. Although it has clocked some miles, and you'll certainly find a few spots of wear here and there, the current owner reports he just couldn't resist the temptation to take this car out, and after all, who can blame him??

Basic black is the interior of choice in this Mach 1, and few muscle cars offered better offices for the serious business of high-performance driving. The high-back buckets are supportive and comfortable enough for cross-country blasts, and thanks to a center console, there's a handy armrest and easy access to the Hurst cue ball shifter atop the 4-speed gearbox. The steering wheel appears to be in well-preserved original condition, indicative of a car that has always been an owner's favorite, and the gauges are still in good shape, especially for originals. The center stack has a later AM/FM/8-track stereo tape deck, which is kind of a fun thing, and yes, there are bright red rubber floor mats under the aftermarket mats, which was a popular addition to Mach 1s back in the day. The trunk is finished with a correct mat, and with the fold-down rear seat, this pony will carry a surprising amount of gear.

If you're going into battle, the 428 cubic inch "Cobra Jet" V8 under the hood is what you want. It's a real-deal 428, fortified with 427 LeMans rods and rockers, a fully balanced rotating assembly, ported and polished heads, and a cackling UltraDyne camshaft. A FoMoCo 735 Holley supplies the fuel and lives under a shiny chrome air cleaner wearing reproduction 428 Cobra Jet decals, and it uses an MSD Pro Billet distributor and control box to light the fires. Shock tower braces reinforce the front end in a way you can actually feel, and those handsome finned aluminum Cobra valve covers add just the right piece of '60s authority to the whole thing. The close-ratio 4-speed transmission feeds a set of 3.89 gears on a 31-spline Track-Lok limited slip inside a heavy-duty nodular iron case. You'll have to do something crazy to break these parts! Great-looking Torque Thrust wheels and big 245/60/15 BFG radials fill the wheel wells, but the original wheels are included with the sale.

If ordinary Mustangs are fun, then this one with a fire-breathing 428 and all the street cred that comes with the Mach 1 name must be off-the-charts. Call today! 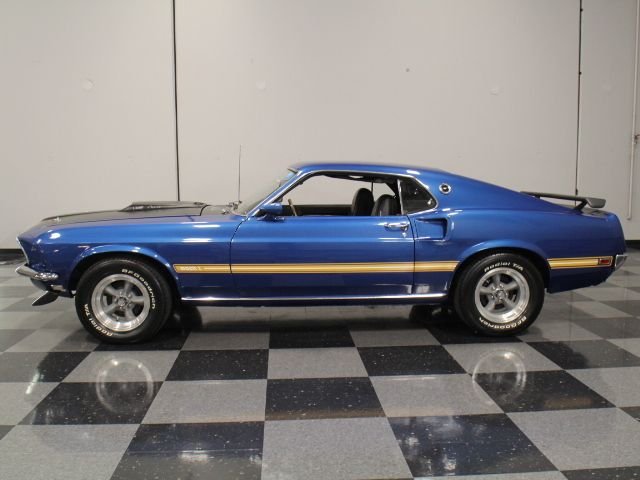