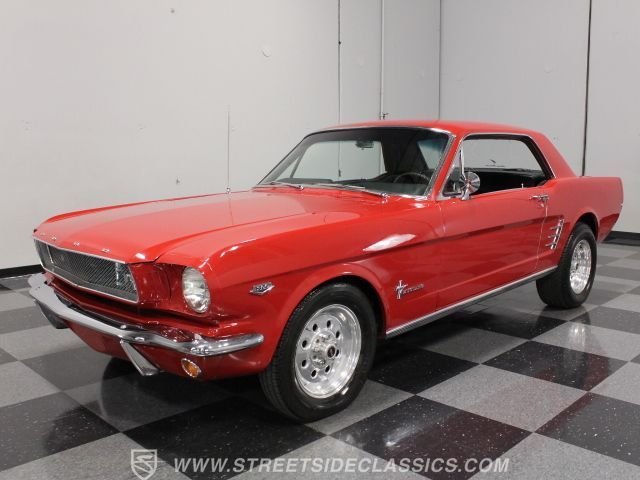 Like many enthusiasts, I'm sure you're scrolling through the photos of all the early Mustangs we have for sale, looking for that elusive '289' badge on the front fender. Well, with this sturdy 1966 coupe, it's legit and the car carries a lot of other upgrades that make it a fantastic choice for the guy looking to have some fun on a budget.

Bright red always looks great on early Mustangs and you can't admit that you didn't stop and take a good, long look at this one. It isn't a show-winner, but the red paint looks right and a dedicated hobbyist could easily take it to the next level without a lot of work. The metal underneath is quite solid thanks to a life in a warm climate and it certainly looks the part of a performance machine with that stance and the Shelby-style grille up front. No add-ons, no scoops, no stripes, just a clean little pony that has had a lot of money spent on the gear under the skin. But that's not to say they skimped on cosmetics, because the chrome is very good, the stainless has been polished, and as a factory C-code car, it carries the desirable '289' badges with pride.

The interior sticks to the original formula, too, with black buckets, fresh carpets on the floor, and only a few well-chosen upgrades that make it a pleasure to drive. They kept the woodgrained dash appliques that frame the original gauges, and everything has a consistent look, from the steering wheel to the dash pad. An aftermarket A/C system has been cleverly integrated into the dash in a much more subtle way than the factory did it and with R134a refrigerant, it's easy to maintain. And since the car originally carried a blue interior, you know that virtually everything involved in the color change is new, from the door panels to the package shelf in back. A modern AM/FM/CD/Bluetooth/iPod system was stuffed into the dash, but the installation was professional and it looks good without being distracting. Open the trunk and you'll find no trunk mat, but rather a fresh gas tank and clean sheetmetal.

While the car looks nice and has a great interior, most of the big investment went into the hardware under the hood. Everything points to this being the car's original engine, although there's no way to know if an early Mustang is truly matching-numbers. At any rate, was rebuilt less than 300 miles ago and it's been heavily fortified, so it's all academic anyway. A Weiand intake houses an Edelbrock carburetor and matching camshaft. MSD added one of their ingenious little ignition boxes and blacked-out Motorsport air cleaner and M/T valve covers add a custom look to the Ford Blue small block. Long-tube headers lead to an exotic-looking X-pipe dual exhaust with Flowmaster mufflers and the C4 3-speed automatic snaps off quick shifts so it's hardly a liability. 2.80 gears in the original rear end make it an easy highway cruiser, especially with those oversized 255/60/15 tires that give it such a great stance. Classic Weld Bullet wheels complement the drag-race look.

A nice car that runs extremely well and looks tough enough to fend off any challenger. Red Mustangs never go out of style, especially when they look this good. Call today! 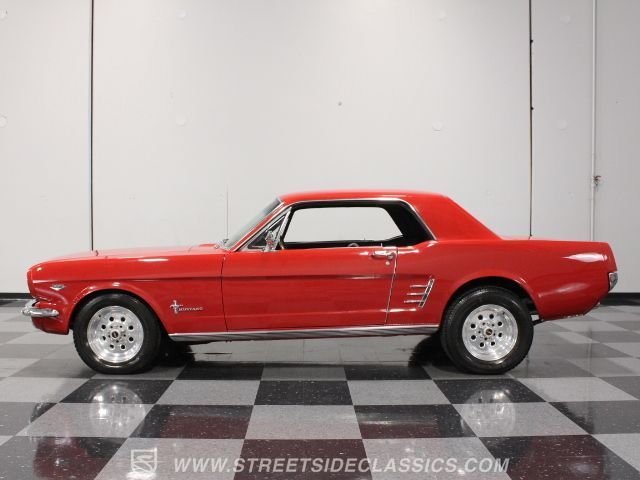