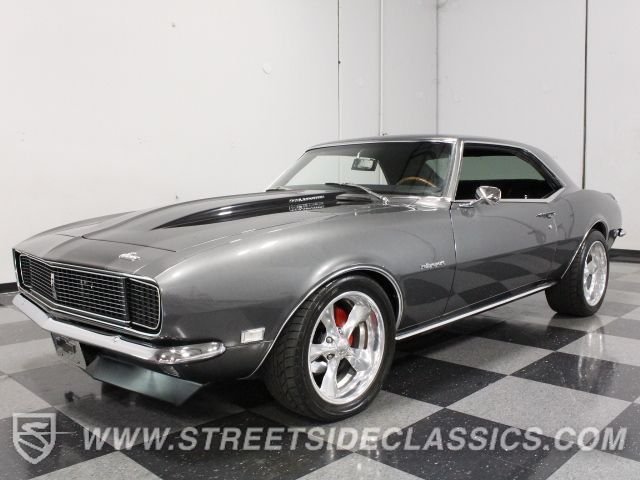 Brutally fast, this 1968 Camaro rocks a stroked small block, a built automatic, lots of chrome, and a sinister black-on-gray paint job that will never go out of fashion. Cars like these attract all the attention at Friday night cruise nights and dominate the drag strips on Sunday afternoons-isn't it time you got in on the fun? Built to enjoy or show, featuring electric cut-outs, subframe connectors and a blistering 383 CI stroker, this is one to keep.

You can't argue with this Camaro's stance, or the brutally effective charcoal gray finish that is the perfect antidote to all the Hugger Orange Camaros running around. Panel gaps are excellent and the paint is super slick, so you'll be proud to show it. The clean look of the early Camaros is popular for a very good reason: it simply looks awesome. A cowl induction hood was installed before the respray, so the stripes could be painted on and out back a factory-style ducktail spoiler gives it a proper high-performance look that accentuates the lowered stance. RS hidden headlights were probably added during the restoration, but this car has moved beyond factory stock and into the realm of high-end resto-mod, so it's hardly a demerit and everyone knows they look right. The bumpers were left in chrome, brilliantly restored, of course, and a minimum of badging keeps the car's identity while giving it a clean, purposeful look.

The black and white houndstooth interior is one of the nicest we've ever seen in an early Camaro. The buckets are maybe a little more plush than the originals, but there's no denying the siren song of the interior luring you to give this one a go. It shows zero signs of use since the build, with fresh carpets, new door panels, and a console modified with an armrest and cup holders. The original gauges remain in the dash with auxiliary gauges in the center console, just ahead of the horseshoe shifter for the TH350 3-speed automatic. A/C has been upgraded to R134a refrigerant with a modern system, so you'll never have to suffer in the heat. A tilt column carries a steering wheel that matches the other woodgrained appliques better than most, and you'll be pleased to see that the trunk is beautifully finished with a correct mat, spare tire with cover, and jack pouch.

For performance, it's hard to beat a small block stroker motor in a lightweight F-body. The strong-running 383 under the hood was built for speed, and like the rest of the car, takes no prisoners. There's a big 4-barrel carburetor atop a shiny intake and a set of aluminum heads under chrome valve covers, all helping to make this car a legitimate threat at the stop light grand prix as well as on the show field. A serpentine belt setup provides great looks and reliability, and a radiator with twin electric fans means you can run hard without worries. Long-tube headers feed cut-outs and a complete exhaust system with glasspack-style mufflers and a transverse Flowmaster, so the sound goes from wicked to downright insane. The chassis is fortified with subframe connectors and fat sway bars, with a 10-bolt out back to deliver the torque. Wheels are from Boyd Coddington wearing staggered 235/45/17 front and 275/45/18 rear Nitto radials for a perfect stance.

With throttle response that can rival a fuel-injected car, that gorgeous paint, and a brilliant interior, this is a no-compromises Camaro that's not afraid to call itself a resto-mod. Call today! 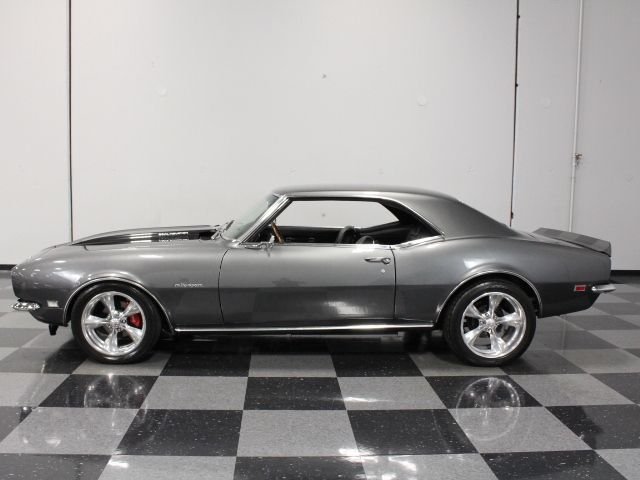