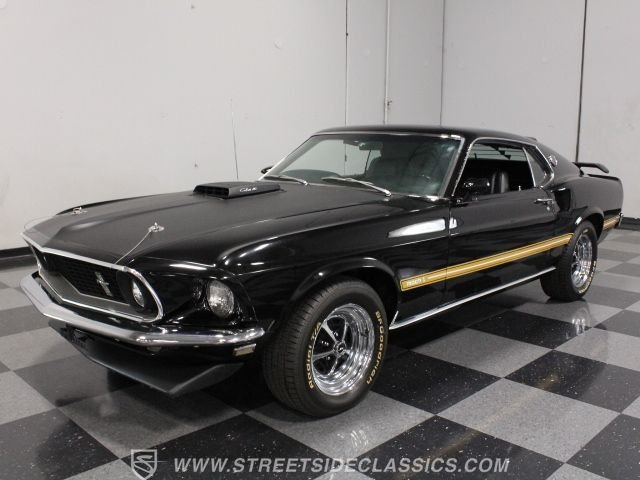 This is the one, guys. Real-deal 1969 R-Code Mach 1s with their original 428 Cobra Jet engines, 4-speed gearboxes, and the coveted Drag Pak option don't come along often, but it's one of the best investments you can make that's also safe to drive without worries about hurting a priceless artifact.

Even better, it's black, so this is one heck of an intimidating Mustang. You already know the '69 Mustang looks tough, but the Mach 1 takes it to an entirely different level, including spoilers, a satin black hood treatment, a Shaker hood scoop and hood pins, and slick stripes along the sides to remind the unwary that this car isn't to be trifled with. Befitting a car this important, the bodywork is straight enough to wear the black paint with pride but it's not so perfect you need to worry about putting it on the road, which really is where a car like this belongs. Leave that trailer queen stuff for the other guys, this sucker wants to rumble. The chrome bumpers look great and shine up nicely and all the emblems and badges are either original or exact reproductions. Early Mustangs don't get much better-looking than this.

Black Clarion Knit high-back buckets anchor a well-restored interior, but you know this car was built for combat. According to the numbers, it's equipped with the Drag Pack, which also probably explains the light options list– if it didn't help the car go faster, it didn't belong here, although there is a center console that's always a nice addition. There's a purity to that philosophy that is immensely appealing, and it's easy to imagine banging through the gears with the big block at full song. Seat covers are correct, as are the door panels and carpets, and it is all in excellent condition. The gauges offer crisp faces and operate as they should, with the original AM radio in the dash delivering a modicum of entertainment. The trunk offers a correct mat, and a peek underneath will reveal solid floors, so you can buy with confidence.

While the Boss 429 might have received all the glory, there's not much doubt that if you wanted a fast Mustang in 1969, a 428CJ was the better choice. Like all automakers, Ford was playing games with horsepower ratings, pinning this one at 335 horsepower, but performance results and subsequent testing suggest that the real number is probably closer to 400. As far as we can tell, this is the car's original engine, rebuilt to stock specifications and nicely detailed. The block and heads have been painted Ford Blue, and there's no missing that cool Shaker hood scoop that force-feeds the big V8 cold air. Finned aluminum valve covers are a '60s performance trademark, and details like the hoses are correct reproductions. The original close-ratio 4-speed has been reinstalled as well, and feeds a 3.91 Trac-Lok rear end. The car is solid underneath with a few nice details like red oxide primer on the front subframe, the properly painted and marked 9-inch rear end, a brand new gas tank, and the recent exhaust system sounds spectacular. Magnum 500 wheels are correct and wear a set of BFG T/A white-letter radials.

This is a fantastic opportunity to own the matching-numbers big block Mach 1 you've always dreamed about. Call today! 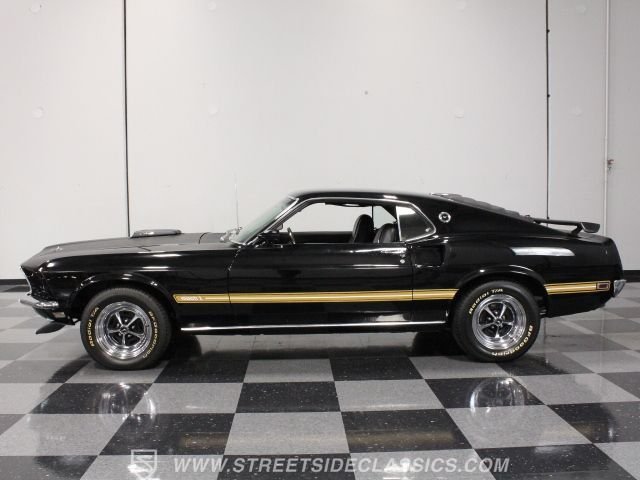