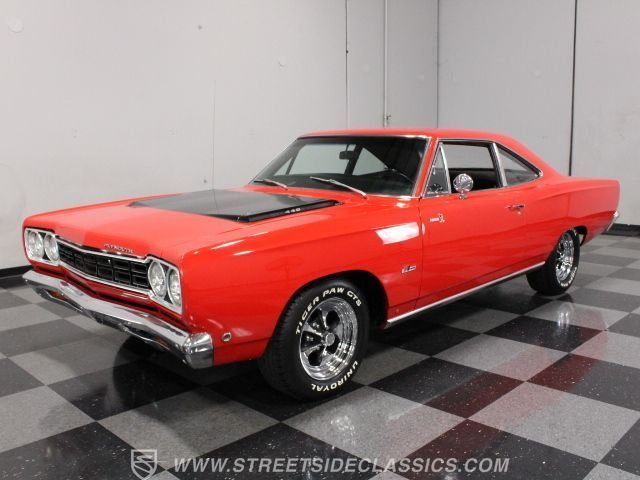 Usually the lack of options hurts the value of a car, but with the case of this 1968 Plymouth Road Runner, the bare-bones street-brawler look really works. No frills, just a built 440, a 4-speed transmission, and nothing to get in the way of going fast. Yeah, I can definitely dig that.

The Road Runner got it right. When everyone else was trying to make their cars all things to all people, Chrysler simply said that the Road Runner would be fast and cheap. As a result, they sold thousands of them and marched right into the hearts of today's enthusiasts who grew up with them. They also look pretty darned good, with chiseled sheetmetal that has survived the test of time and a look that says Mopar without any apologies needed. The vivid bright red paint is perhaps a shade brighter than Matador Red, but man, it looks awesome, especially with that blacked-out hood treatment! The raised line along the quarter panel is razor sharp, gaps are quite good, and the correct badges were used throughout to retain that personality that defined the fun and wacky Mopar muscle cars of the period. You'll also find bright chrome and a nicely finished tail panel that shines up nicely.

Industrial strength certainly applies inside, where a bench seat nestles up against the 4-speed pistol-grip shifter. You want frills? You shop somewhere else. If you want speed, this is your chariot. The original gauges kept the bargain-basement theme going, offering only the basics, but the aftermarket has come to your rescue with this car wearing a column-mounted tach and white-faced auxiliary gauges under the dash. Someone spent some money inside, however, as the seat covers, carpets, and door panels look fresh. That's a factory Music Master AM radio in the dash (speakers and wires are heavy, you know) and I like the industrial look of the rubber floor mats (yeah, I know it's a Plymouth, not a Dodge, but they fit the car's personality). The spacious trunk is ready for a road trip to the Mopar Nationals with a few friends, and it carries a fresh mat to give it a finished look.

You couldn't get a 440 in 1968, but that doesn't mean it isn't a perfect fit. Thanks to Mopar Performance, the big block nestles right in there and looks great, topped by a set of finned valve covers and a chrome air cleaner that wears reproduction deals for a factory-ish look. Turquoise paint on the block and heads is a nice contrast to the bright red body paint, and a few polished and chromed details make this an engine bay worth showing off. It's backed by a 4-speed manual gearbox and an 8.75-inch rear end, so don't be afraid to spin the tires now and then, it can take it. Long-tube headers and fresh Flowmaster dual exhaust system have an intoxicating sound behind the big block and looks great against the shiny black chassis. Flashy Keystone wheels are both traditional and stylish and wear recent Uniroyal white-letter radials.

So don't think of this as a low-option car, think of it as optioned for maximum performance. The money was spent in all the right places, making this big 'Beeper is a joy to drive. Call today! 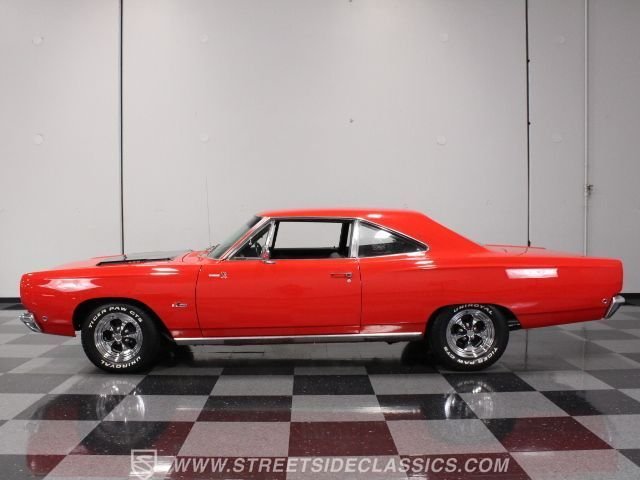