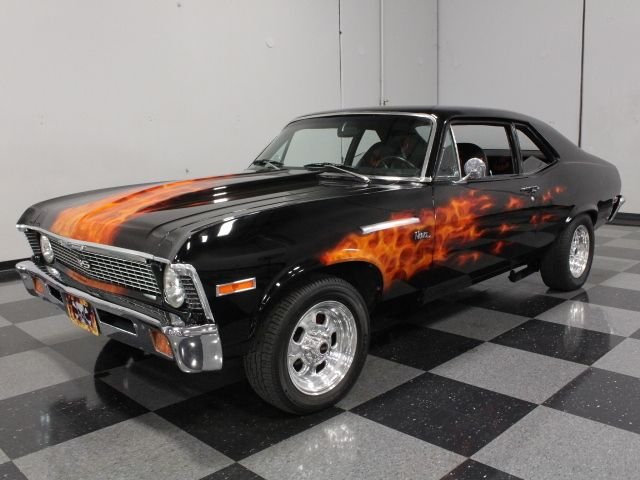 Cars like this 1972 Chevrolet Nova are a double-edged sword. On the one hand, it's utterly and completely impossible to keep a low profile when your car is covered in flames. And on the other, if it looks like this, it had better be totally badass when someone lines up next to you. Fortunately, this bruiser delivers on its looks and you'll never worry about the other guy again once you own it.

Basic black is always a good choice, and we've found that it works particularly well on the Nova's blocky shape. This 2-door sedan is probably the best choice for a street brawler thanks to its slightly stiffer body and lightweight platform, and they pulled no punches during the build. Of course, making it black meant investing a lot of time in the sheetmetal, especially if you intended to turn it into an eyeball magnet like this. As a result, the black is shiny, rich, and deep. Once the base was in shape, realistic flames were airbrushed on the front fenders and doors, the cowl-induction hood, and even on the deck lid where it spells out "Nova SS" in demonic script. The real flames are quite convincing and probably more accurately represent the inspiration for the traditional graphics than the cartoonish licks that wander over so many hot rods today-I mean, this sucker actually looks like it's on fire! Add in some shiny chrome bumpers, SS trim and badges, and a nasty disposition, and you get a car that makes no apologies for what it is.

The interior is designed along the same lines, taking the original look and adding fire. Black cloth seat covers were wrapped around the original bucket seats and adorned with embroidered flames and skulls, plus a bit of contrasting orange piping for good measure. A custom center console holds the trick B&M shifter and three white-faced auxiliary gauges, and there's a gargantuan tach and shift light mounted on the steering column-if that doesn't suggest serious intent, I don't know what will. There's an AM/FM/CD stereo just in case the car itself isn't enough entertainment for you, and that little extra switch on the dash controls the car's other audio system: a set of electric cut-outs on the exhaust. The work is quite well done, suggesting that someone spent the long dollar on making this car a serious piece. The neatly restored trunk carries a reproduction mat, but little else that'll hamper performance.

And performance is the key here. The engine is a 468 cubic inch big block with a stock crank, "pink" rods, and forged pistons from Keith Black. Lunati supplied the valvetrain, which acts on a set of large port 110 cc heads and is fed by an 850 Holley double-pumper on an Edelbrock hi-rise intake. Long-tube headers and a snarling Flowmaster exhaust system provide ample warning to the unwary, and everything under the hood is new, including belts, hoses, alternator, water pump, and even the heater core. A freshly-built TH350 3-speed automatic by Godley provides lightning-quick gear swaps and powers a 12-bolt with 3.73 gears on a Posi. Traction bars help hook things up, and it wears 205/60/15 front and 235/60/15 rear Kelly radials on flashy Weld wheels.

Yeah, it's every bit as fast as it looks, so if you're the kind of guy who prefers to simply kick the door in rather than politely knocking, perhaps this is your ride. Call today! 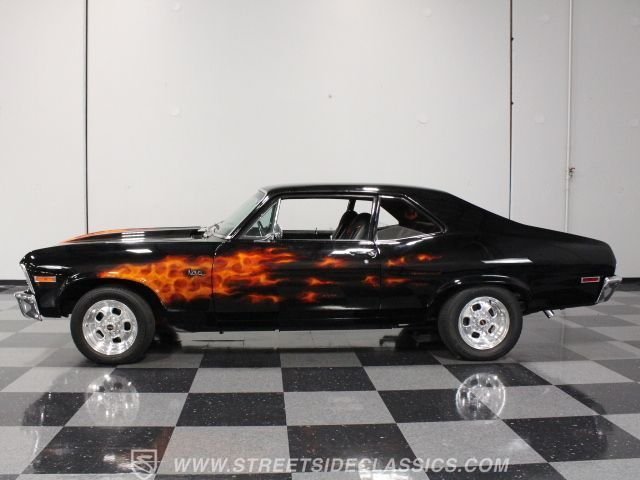