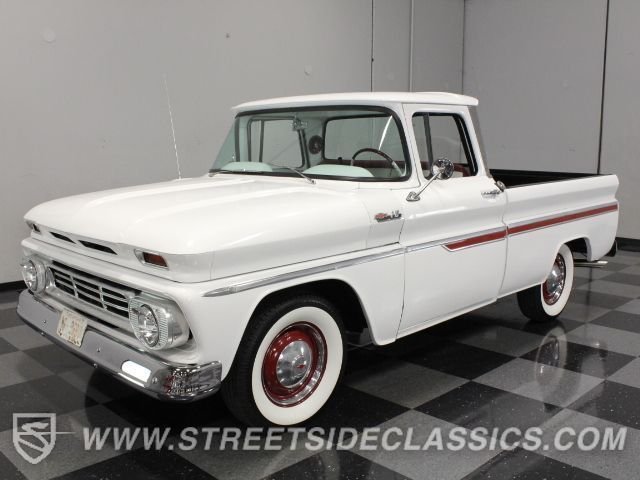 Looking bright and crisp in its dress whites, this 1962 Chevrolet C10 pickup is a wonderful reminder that you don't need a modern truck to get the job done. With its original 283 under the hood, that brilliant white paint job, and two-tone upholstery that's way more stylish than you'd expect, this is a fun hauler with a lot of personality.

It's quite likely there were a lot of these white pickups running around in 1962, but a vast majority of them were working hard and not expected to survive another five decades. Fortunately, this one had caretakers who appreciated its many charms and took good care of it through the years. Somewhere along the line it got a fresh coat of blindingly white Arctic White paint, which, combined with the red inserts on the side trim and the red steel wheels, gives it a very vintage look that seems appropriate for an old hauler. The wood bed was refinished, but not to perfection since this truck still wants to earn its keep, and the bumpers were restored. A lot of the trim remains original, but since it's stainless steel, it cleaned up nicely and looks right. The rest of the bed was finished with a spray-in bedliner material that looks good and will last virtually forever. If it's attention you crave, this truck knows how to get it.

Even more dazzling than the exterior is the upholstery. The factory bench seat remains, but it's covered in funky alligator skin hides (white, of course) with red trim and piping just for effect. Experts will note the steering wheel is an Impala piece whose two-tone rim sets the right tone for the entire interior. Factory instruments live behind a single face, a cool effect that almost looks custom-made. The steering column is from a later vehicle, too, and an AM/FM/cassette stereo head unit was neatly installed in the original steel dash. New black carpets keep it from being too red or too white inside and seat belts were added for safety. You can see how easy it would be to spend some time in here, and imagine the crowd that this truck will draw at the next cruise night.

As far as we can tell, that's the original 283 cubic inch V8 living under the hood. It's clearly been freshened and detailed without losing its identity. That's the original air cleaner with "HIGH TORQUE 283" decal on its face, there's bright Chevy Orange paint that really brightens up the black engine bay, and even the original generator is still making the electricity. Underneath, there's a brand new single exhaust system with a Flowmaster muffler, so it has a nice V8 burble to go with its arresting good looks, and the chassis shows off a lifetime of easy living. A 2-speed Power Glide transmission feeds the original rear end, while the front end is an independent setup that actually rides and handles quite well for a pickup. And as I mentioned, those red wheels with flashy whitewall radials make keeping a low profile virtually impossible.

A clean old truck with a lot of charm, and with a V8 under the hood, it remains fun to drive as well as practical. Call today! 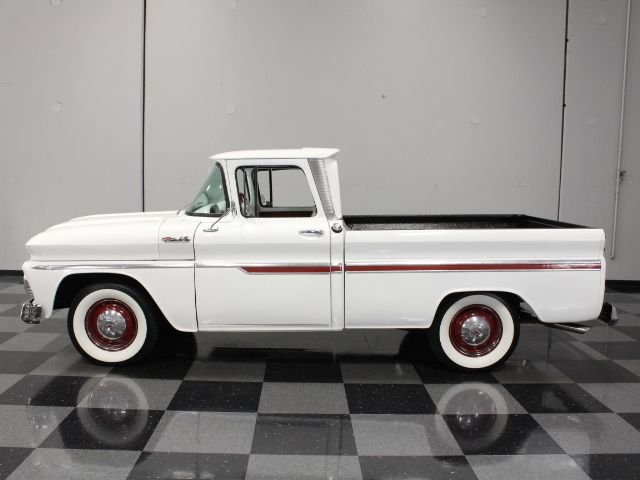