×
back
1975 Pontiac Firebird Trans Am 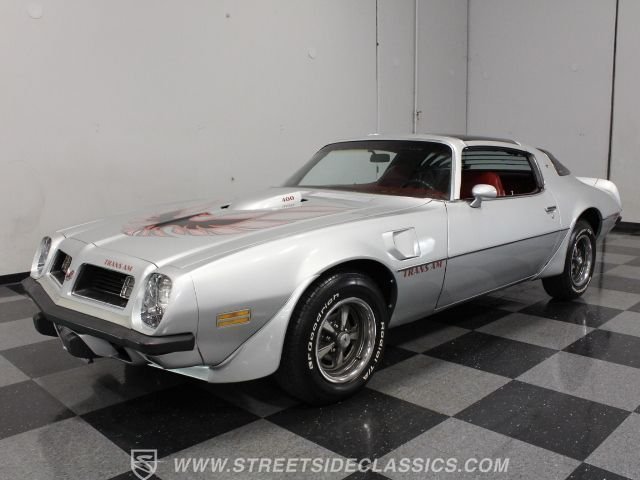 400 cubic inches, T-tops, and a screaming chicken on the hood were still the top of the food chain in 1975 when this Trans Am ruled the streets. Sure, it may have been the dark ages of horsepower, but that didn't mean that the diehard gearheads at Pontiac weren't doing their best to keep the flame alive, and cars like this were the key.

Refinished a few years ago in its original code 13 Sterling Silver, this is one of those '70s Trans Ams that you just have to respect. Not only does it look great, but the details are the kinds of things we'll never see again. Just look at the deep air dam that wraps around to the front fender openings, the defiant hood scoop, and the upright 3-piece rear spoiler, all of which would probably be illegal today. Add in a glorious set of reproduction graphics and you have a car that's all about eyeball appeal. The bodywork was nicely done and it's pretty clear that this car was a nice one to begin with, so taking it to the next level was all about nailing the details. You'll note even door gaps, a smooth, flush-fitting hood, and the straight finish on the sheetmetal. The bumpers are wrapped in black rubber, Pontiac's way of integrating the design in the wake of sweeping federal regulations, and while they're tough to keep perfect, these are pretty darned good. Rear window slats are a great '70s performance look that's also functional, and who doesn't love T-tops?

The red interior is a great complement to the silver bodywork, even if you're not on your way to the disco. It's very sophisticated, suggesting that someone at Pontiac was paying attention to class, not merely fashion. The seats wear freshened seat covers that fit well and stretch over fresh foam, so long road trips are comfortable and not exhausting. The door panels and center console are obviously original and are starting to show their age, but I don't know if they deserve to be replaced. New red carpets with the original weave and nap look great and the shiny engine-turned appliques on the dash still glitter like jewelry. All the gauges show crisp markings and the factory A/C has been converted to R134a refrigerant. There's also a newer AM/FM/CD stereo feeding big 6x9 speakers on the rear deck. Finished with a reproduction mat and spare tire cover, the trunk also looks ready for primetime.

The original, numbers-matching 400 cubic inch V8 still lives under the hood and makes power and torque that live up to the promises made by the outrageous bodywork. Rebuilt less than 5000 miles ago, the powertrain snaps to life with a righteous bark from the dual exhaust and runs like a true high-performance machine. Pontiac Turquoise paint makes it look right, and you'll notice things like a modern A/C compressor and a new alternator under the hood to help with reliability. The TH350 3-speed automatic transmission was rebuilt at the same time and powers the stock 10-bolt rear end. Stock Rally II wheels with 215/70/15 BFG radials fill the wheel wells and give it a muscular stance.

The look has matured well and these cars are growing in value now that collectors are discovering that they're a lot of fun. Take this one home by giving us a call today! 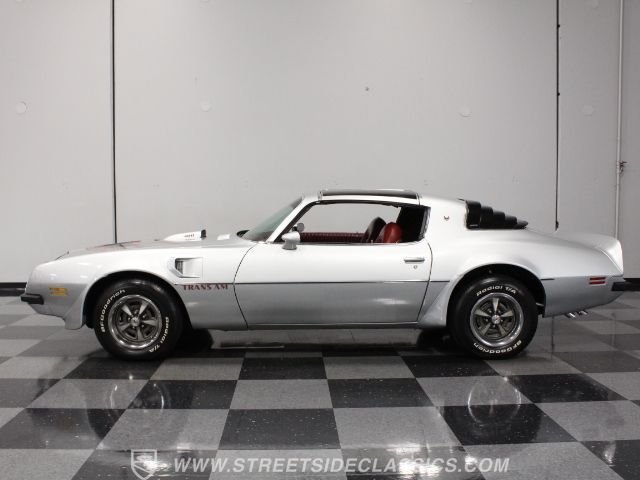