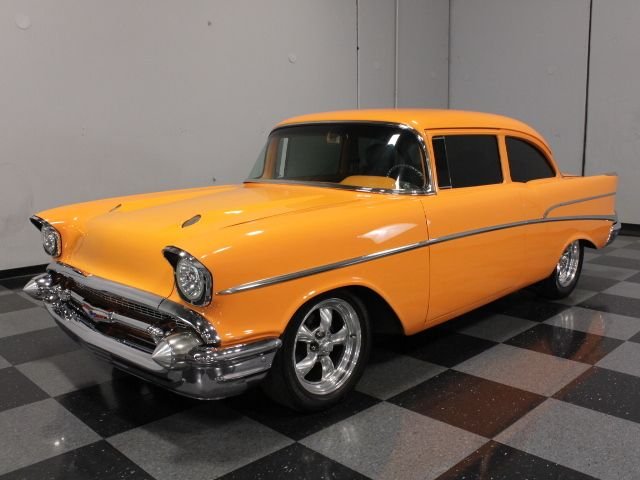 After seeing this fantastic 1957 Chevrolet 210 2-door sedan, I have to say I'm thrilled that it isn't red. Not that I don't like red cars, but if I had a nickel for every Matador Red '57 I've seen, well, I'd be able to buy one and paint it any color I wanted.

Anyway, my point is, this one wears PPG Hot Lick Orange, and I like it. A lot. It's different, it's high-visibility, but it also really works on the '57's shape. A mild custom like this does well with interesting colors, and admittedly orange isn't a big risk, but getting all the elements to come together so nicely is what makes this car so special. In essence, it's more than the sum of its parts. A few key pieces of trim were removed, including the door handles and emblems, so it looks a bit sleeker than your usual '57, and combined with the darkly tinted windows, the car has a very imposing look that suggests performance. Gaps are excellent and the sheetmetal is straight enough to withstand the scrutiny that a car like this is sure to generate. The chrome that does remain is, of course, in outstanding condition, since you just can't have a '57 Chevy with lousy shiny bits.

The interior makes no pretense about originality, and provides first-class accommodations by using modern buckets swathed in two-tone hides and a custom back seat, all of which look like they were OEM bits from a high-end European import. The dash is almost entirely hand-fabricated, although the instruments pay a passing tribute to the originals, which is a very slick trick. Obviously, smooth was the key word, and any traces of knobs, handles, levers, vents, and other equipment was erased during the build and carefully stashed out of sight. But have no fear, it still carries all the requisite goodies, including A/C, an AM/FM/CD stereo system, and an automatic transmission, all tucked into the custom center console. And check out the original clock stashed in there, kind of a cool feature that really works. The trunk is beautifully finished to show standards, including a beautiful enclosure for the stereo gear with a window to show it off.

Someone with a keen sense of style was in charge of the engine bay, and not only is it a blast to drive, it also looks amazing. The 350 cubic inch V8 looks almost otherworldly in black with just a few polished accessories to light things up. The block was bored .030 oversized and stuffed with flat-top pistons, an Erson cam, and a set of Edelbrock aluminum heads, plus a matching intake and carb, so it runs every bit as great as it looks. Wiring and plumbing were neatly hidden and the surrounding landscape is as custom and beautifully finished as the body. Shifting duties fall to a 700R4 4-speed automatic spinning a set of 4.10 gears in the 10-bolt rear, but with that overdrive gear, it's still a fantastic highway cruiser. A full custom side-exit exhaust system gives it a wonderful street-racer sound and it sits exactly right on those 17-inch Torque Thrusts with 225/55/17 front and 255/55/17 rear Goodyear radials.

If you're tired of the same-old, same-old, then this '57 Chevy is the cure. Very slick and a lot of fun to drive, enjoy life on the other side. Call today! 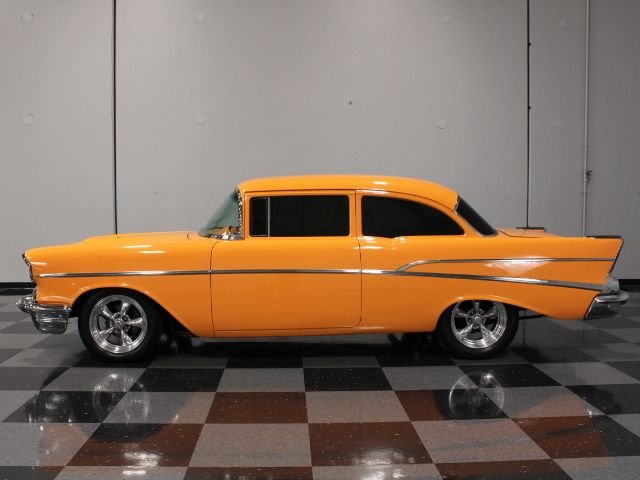