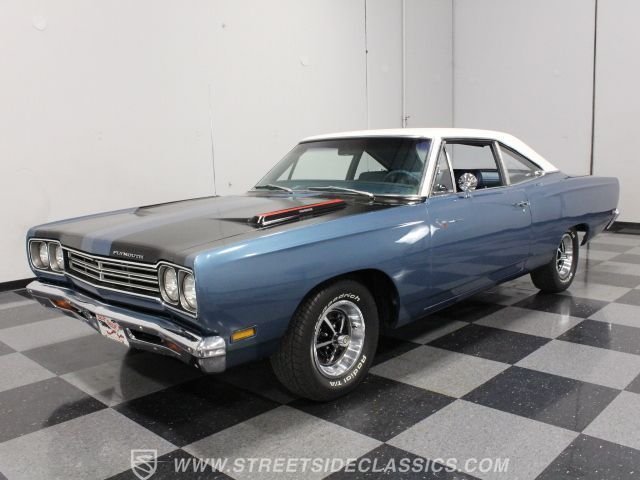 High performance with a low sticker price has always been the Road Runner's calling card. Today, they're highly-sought collectables due to the fact that the formula still works. This particular 1969 Road Runner offers a numbers-matching 383 cubic inch big block, an ultra-clean interior, and several performance upgrades that make it a car that will make you smile every time you turn the key. And it still won't break the bank.

This 'Bird was restored a few years ago and the bodywork remains straight and clean, with sharply rendered creases on the quarters and decent panel alignment. B3 Ice Blue paint is quite nice, and if you're going to drive it, it's ideal-with those stripes and the hood decorations, nobody will mess with you on the street. These were never intended to be show pieces, and you Mopar fans who were around when they were new already know that they were never perfect, even off the showroom floor. Instead, it has a purposeful look that is ready to rumble, and still presents well running down the road. The chrome and trim remains very nice, and all the proper Road Runner decals are in place. I think more than anything, I appreciate the honesty of this car-it's just not pretending to be anything other than what it is, and you have to respect the performance for the dollar that it represents. And that bright white vinyl top just looks cool.

Inside, this Road Runner is simply spectacular. Someone invested in new two-tone seat covers that are exact duplicates of the originals, complete with the federally-mandated headrests, and the detailing on both benches is quite impressive. Sure, a column shifter and bench seats don't scream performance, but remember this was all about going fast on a budget. The original gauges are all in place, and I kind of like seeing it without the ubiquitous auxiliary gauges and a column-mounted tach. The original Music Master AM radio is still living in the dash, but otherwise this 'Beeper is light on options and big on performance. Another nice touch is the fresh plaid mat in the trunk, which gives this budget hot rod a bit of an upscale feel.

But the real reason you want to own a Road Runner is that a big block was STANDARD EQUIPMENT. The original numbers-matching 383 under the hood delivers smile-inducing acceleration and that wave of big block torque that made these cars so popular with young buyers in the '60s. Painted in Hemi Orange with all the correct details and stickers, it looks suitably racy and runs superbly. It's pretty much stock, which is remarkable for these cars, but someone cared more about authenticity than the extra few hundredths of a second in the quarter-mile. Not only is the engine original, but the 727 TorqueFlite 3-speed automatic is also original to the car and it spins an 8.75-inch rear end. New shocks, a new set of mufflers and tail pipes, and some impressively clean floor pans all give you confidence to take this one home. Handsome Magnum 500 wheels were a favorite then as well as today, and wear bulging 245/60/15 BFGoodrich radials. 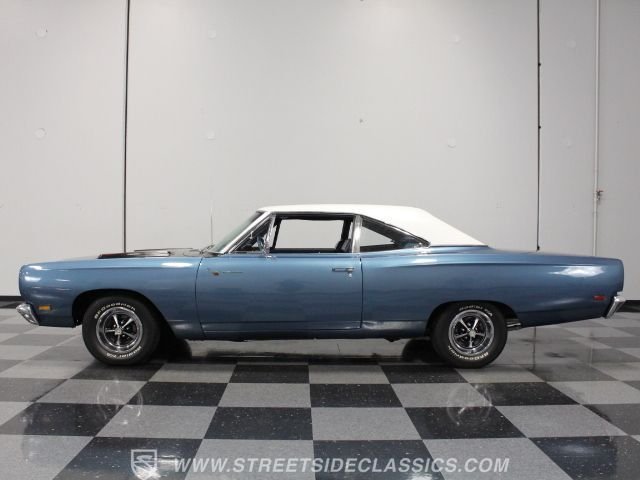