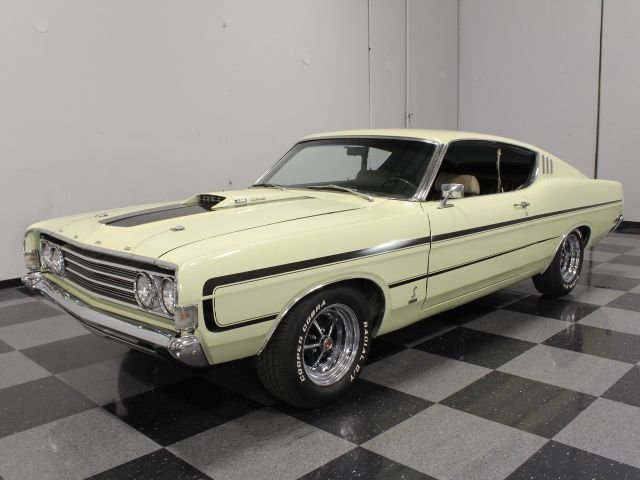 Born and bred for the super speedways of NASCAR, this 1969 Ford Torino Cobra is full-sized performance that practically defines the word muscle car. With 428 cubic inches of Cobra Jet performance, it seemingly ignores the laws of physics, yet still manages to be civilized enough to drive every day.

Ford called this color "New Lime" but I'm not seeing it. It's correct code 307-A paint, but it's actually a subtle yellow that works well with the black graphics and the Cobra's overall attitude. After all, the dissonance between the subdued color and the dominating performance is something that we all enjoy-put a Bach sonata on the radio for maximum effect. Anyway, whatever the color, it was nicely done in 2009 and is holding up quite well, showing off a shine that took a lot of time back then and is a pleasure to wash and wax today. The sleek fastback styling practically defines Ford performance in the '60s and makes a real statement today when most cruise night parking lots are full of Chevelles and pony cars. Hood pins, a scoop, and a few discreet Cobra badges lend it a predatory look, and there's plenty of bright chrome trim to reinforce the luxurious side of the car's personality.

Two-tone upholstery gives the interior an upscale look and works quite well with the understated exterior paint. New seat covers, correct carpets, and clean door panels with "Grand Touring" badges that mark this as an upscale edition, are all nicely rendered here. The four round pods that make up the instrument panel are definitely racy-looking with handsome original gauges inside that use brushed stainless faces. There's no way to confirm it, but given the overall condition of the unrestored bits of this car, we strongly believe that the mileage shown, 83,813, is authentic. The column-shifted automatic and bench seats aren't exactly sporty, but you have to remember that the Torino was splitting a market and as such, it neatly appeals to both sides and seems to do everything well. A later AM/FM stereo has been fitted in the original slot, and it looks good and sounds great, even with the 428 at full song. There's also a massive trunk under that fastback profile, which includes a set of nice mats and a full-sized spare.

The 428 cubic inch Cobra Jet V8 is legendary in Ford circles, and with 335 horsepower on tap, you can imagine how well it runs. Fed by a correct ram air induction system with functioning air cleaner, it fires up eagerly and hums with anticipation as it idles. Ford Blue paint on the engine and air cleaner give it the right look, and a few dress-up pieces like the chrome valve covers and braided stainless hose sleeves make the engine bay a bit more interesting. It's backed by a 3-speed C6 Cruise-O-Matic automatic transmission and 3.00 gears on the original limited slip rear end. The restoration addressed all the major components underneath, so it's still quite clean but no longer detailed for show, but it's an absolutely excellent runner. Handsome Magnum 500 wheels should be standard equipment on any Ford muscle, with these wearing 225/70/15 performance radials. 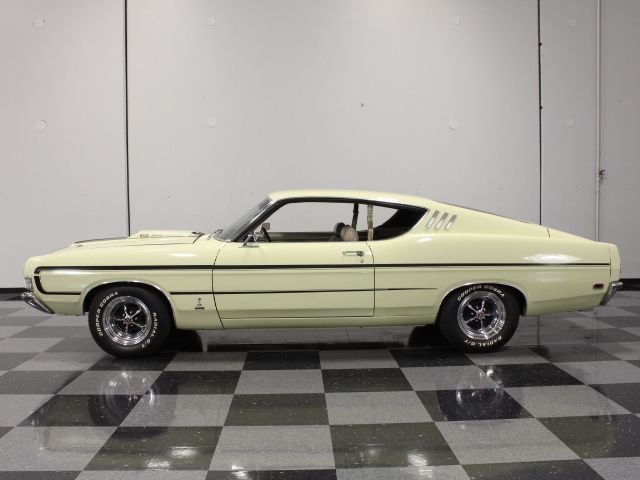