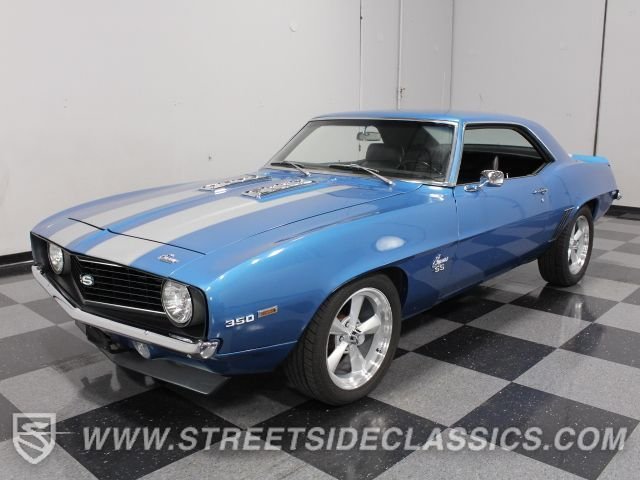 If you like to drive, small block Camaros are what you want. Cars like this 1969 SS350 are nicely balanced, with great handling and acceleration that still intimidates other drivers on the street, all without the fuel economy penalty of a big block. This fresh-looking hardtop offers all the virtues and none of the vices of an early F-body.

Repainted about a year ago, this SS sparkles. The Lemans Blue finish is a great choice today as much as it was in 1969, when it was second only to Hugger Orange in popularity. Somehow this one looks longer and sleeker, perhaps due to the gray SS stripes that are less harsh than the usual black or white, or maybe it's the stance, which is more road race than quarter mile. It proudly wears '350' badges on the front fenders, along with the requisite SS emblems on all four sides. And kudos to the guys who built it and kept the original hood, which I think is a cooler-looking piece than the cowl induction unit. Finish quality is quite good and the 1969 Camaro sheetmetal doesn't tolerate sloppy workmanship with that sharp crease running along its flanks, and this one looks pretty darned good in the flesh. Although the build sheet has been lost to the ages, this one definitely has the unmistakable SS look throughout the build. Shiny chrome bumpers, quarter panel inserts, and polished stainless window trim all add some glitter that sparkles against the Lemans Blue paint.

A black interior in a Lemans Blue car is perhaps the best possible combination, and with newer seat covers, clean door panels, bright wood appliques throughout, and carpets that look fresh, the interior is ready to rock. Even what GM called the "standard" setup was pretty stylish, and with a center console and that horseshoe shifter, the Camaro becomes a pretty nice place to spend some quality time. It may seem strange to us, but even the SS models didn't get a tach or auxiliary gauges as standard equipment, so this one has the basics plus a pair of auxiliary gauges under the dash. The original AM radio is gone, so it's ready for the head unit of your choice and the original "Astro-Ventilation" is still in place and still effective. The trunk is finished with a fresh mat that's so new it's still working out some of the kinks, and it appears that a lot of the weather stripping is new, too.

The reason I like this Camaro is the 350 cubic inch V8 up front, which is hundreds of pounds lighter than a big block, improving handling and braking in a big way without a major sacrifice in acceleration. With an Edelbrock 4-barrel carb and intake up top, Z/28 style finned aluminum valve covers, and bright Chevy Orange paint, it looks every bit the part of a hi-po bowtie. Long-tube headers and a new dual exhaust system give it a great V8 rumble that few other engines can match, as well as a fat torque curve. The TH350 3-speed automatic transmission snaps off shifts like rifle shots and the 10-bolt out back is built to take it. The front end uses 1-inch lowering spindles to get that awesome stance, although the 17-inch Riddler wheels and 215/50/17 front and 225/55/17 rear radials certainly help.

If you've been looking for a great early Camaro, try bending this SS350 into a corner before making your decision. Call today! 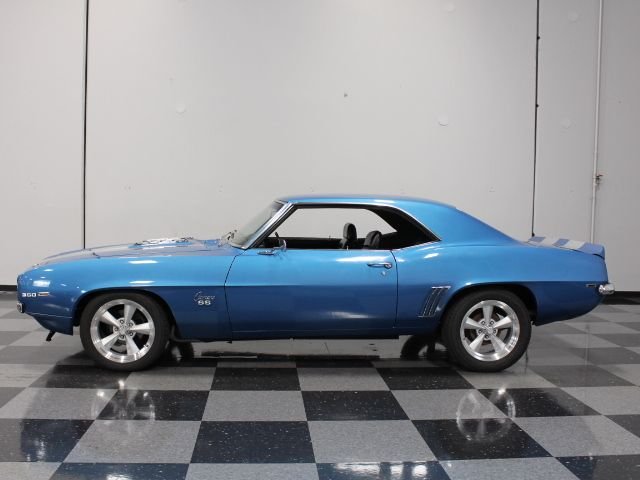