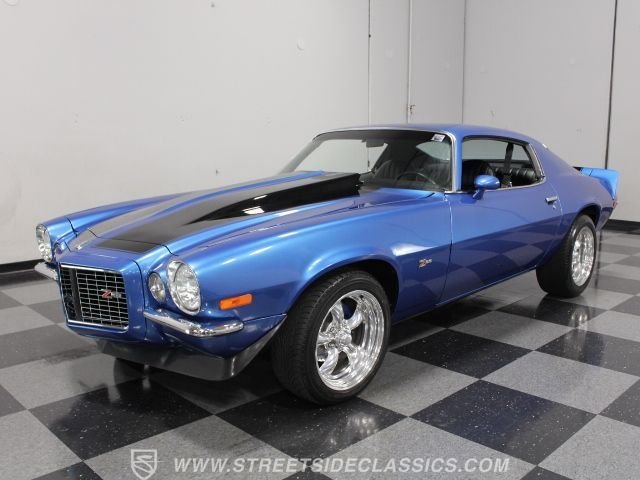 Second-generation Camaros have a lot to offer and the time is now to put one in your garage. Cars like this 1973 RS with its thumping 454 big block are the next generation of muscle now that fans have discovered their improved handling, comfortable interiors, and mod-friendly nature.

Long and sleek, the second-gen F-bodies look timeless today. The world has gotten over their disco-era flash and now the best ones are being turned into some seriously slick machines. The vivid electric blue on this Camaro only serves to emphasize the slick bodywork, which shows excellent gaps, laser-straight quarters, and great attention to detail. Additions include both the chin and deck lid spoilers that really emphasize the rake on the suspension, and a cowl induction hood that's probably mandatory to cover that big block underneath. Black SS stripes were added under the clear and although the Z/28 badging is just for looks, but the RS chrome bumpers on either side of the large grille are the real deal. Either way, there's no denying this car is truly stunning. The chrome is brilliantly restored to a high shine and stands out nicely against the blue paint, particularly the bumpers that fit flush and look great.

Like the shape of the body, there's not much you can do to improve the handsome black bucket seat interior. Most of the stuff in there is new, from the seat covers to the door panels to the carpets, but there are definitely a few noteworthy upgrades. First, key it up and you'll find that the dash blazes to life with white-faced Auto Meter instruments that almost look like they were born there. The shifter for the 4-speed manual is topped by a Hurst cue ball short-throw shifter and there are aluminum pedals down low. And for entertainment purposes, there's a Pioneer AM/FM/CD/iPod stereo in the original spot. Both the front and rear seats look virtually unused and there's no wear on the carpets, given that this car was only finished a few hundred miles ago. The neatly finished trunk carries an original mat and a battery with a big, red kill switch next to it, just in case.

You couldn't get a big block in your 1973 Camaro, but that doesn't mean it won't fit. The 454 cubic inch V8 is actually a perfect fit between the F-body's shock towers and the engine bay was properly dressed to handle it. Satin black frames the bright Chevy Orange engine, which is highlighted by polished aluminum valve covers and a chrome air cleaner, plus one of Edelbrock's intake manifolds with the Endura-Shine finish and a Quickfuel carb. New billet pulleys tuck the accessories in tight for great clearance and there's a massive aluminum radiator up front with twin electric fans keeping it all cool. The chassis is equally well-detailed with red oxide floors, painted subframes and a fresh Flowmaster exhaust system, while the functional upgrades include welded-in subframe connectors and 4-wheel disc brakes. The factory 10-bolt is still doing its thing out back and it hooks up thanks to a set of 215/50/17 front and 255/50/17 rear performance radials wrapped around polished Torque Thrust wheels.

Stop sitting on the sidelines waiting for the perfect combination of affordability and condition, this Camaro is ready to rock. Add a few of your own details and it'll be the hit of any show. Call today! 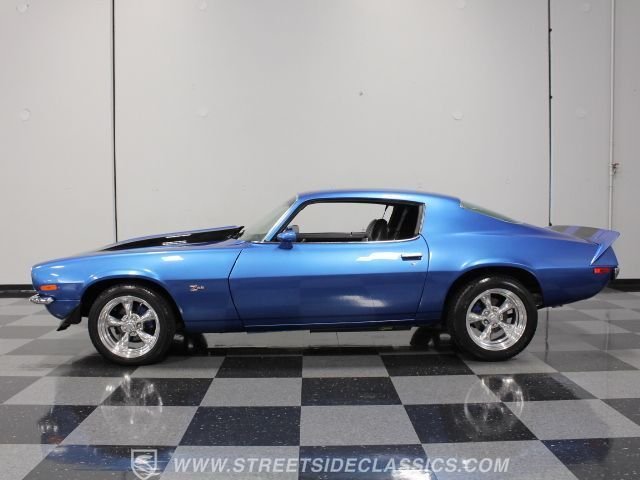