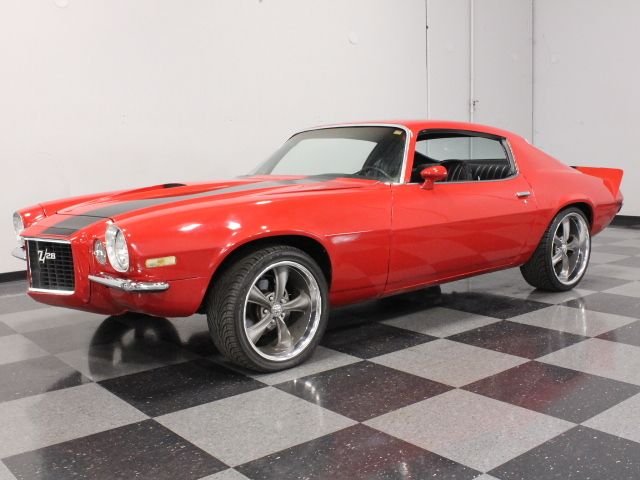 The oil embargo of 1973 scared a lot of Americans into thinking the muscle car was dead. Fortunately, Chevrolet was still willing to cater to folks who weren't yet willing to believe the sky was falling. This 1973 Camaro Z/28 tribute is a great example of period muscle from an era when a lot of folks were afraid of eight cylinders.

Repainted just a few years ago in a sizzling bright red finish, this flashy Camaro is fairly well recognized as one of the best looking second-generation F-bodies. With the blacked-out grille and small chrome bumperettes on either side, chin spoiler, and not-so-subtle deck lid spoiler, the RS package is aggressive but not overdone. When the car was repainted, it also received a hood from a later model that now proudly wears a set of black SS stripes that extend to the rear of the car. While the paint is showing a few signs of use here and there, it still presents quite well, and who can blame a guy for wanting to drive his slick Camaro? There's not a lot of chrome on these cars, but both the front and rear bumpers are nicely finished, the stainless window surrounds are bright, and it carries a Z28 emblem on the front grille, just in case the rest of the car wasn't intimidating enough.

The interior is in good condition with some recent work, which suggests that it has always been actively enjoyed and not permitted to unwind and hastily put back together. A fresh dash pad was installed last spring, along with new carpets and awesome white-faced gauges from Omega Kustom Instrument Company. Those bucket seats are firm and supportive, with no splits in the vinyl, and the back seat looks like it has never been used. Perhaps the only spot where the interior might reveal its age are the door panels and center console, both of which might very well be original. A Sony AM/FM/CD/iPod stereo head unit has been installed along with a pair of powerful 6x9 speakers on the rear deck. Pop the deck lid and you'll find spatter finish paint, just like the factory did it and a surprising amount of storage capacity.

While the car was being repainted, the engine came out for a complete rebuild to stock specifications and the engine bay was detailed. Earning the right to wear that Chevy Orange paint as much as any of its ancestors, the engine bay is nicely detailed. The 350 makes great sounds and drives extremely well thanks to an Edelbrock intake and 4-barrel carburetor living under an open-element K&N air filter. Power brakes and power steering are nice features, and all the hoses appear to have been replaced at the same time as the engine. Chrome dress-up items like valve covers and a radiator shroud brighten things up and long-tube headers feed a newer Flowmaster dual exhaust. Underneath, it's very original and a bit crusty, so you won't be afraid to drive it, offering a TH350 3-speed automatic, a 10-bolt rear end, and a newer gas tank. It rides on towering Boss Motorsports wheels that replicate the Torque Thrust look and wear 235/40/18 front and 275/30/20 rear low-profile radials that almost look like O-rings.

Second generation Camaros don't get any better looking than this, and despite gas shortages, this one can still run like a true muscle car. Call today! 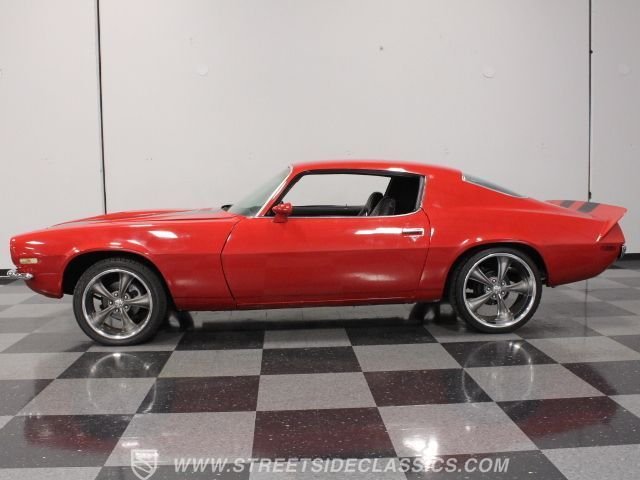