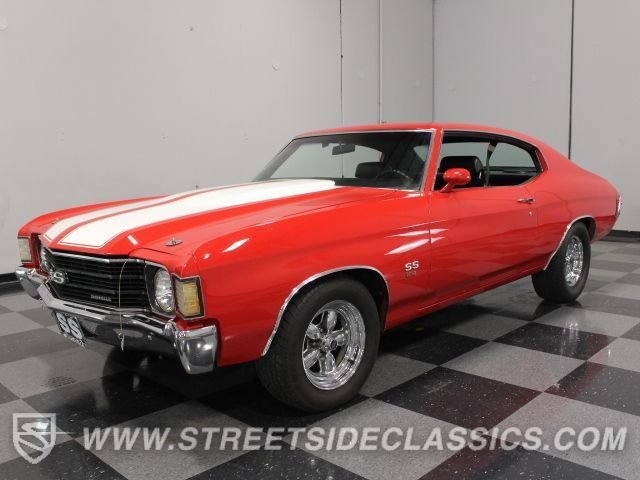 If you're like me and prefer the look of the later Chevelles and the torque of a big block, then perhaps this 1972 Chevelle SS will get your attention. The mill is a 502 backed by a 700R4, and thanks to a paint job that hasn't seen a lot of use since it was completed, it is ready to play this Friday night.

Actually, the paint job was done in 1996, but before you start thinking that it might need some help, let me also point out that it has been driven just 5000 miles since then (that's less than 300 miles a year). As a result, it still looks quite fresh and the bright Flame Red paint color was borrowed from the 1985 Corvette color palette so you know it stands out. The look is definitely traditional, but that's what you want in your big block Chevelle, right down to the SS stripes stretching across a cowl-induction hood. Finish quality is good and the car was clearly very straight before any paint went on, so there are no worries about what's hiding underneath. Hood pins, a blacked-out SS grille, and just a few '502' badges to tip its hand a little give it a fantastic high-performance vibe that's not just for show.

The interior is just what you'd expect too: black buckets and a center console, the way Chevelles were meant to look. The upholstery is probably as new as the paint and just as well-preserved, with seats that look virtually unused. The steering wheel is the same simulated string-wrapped setup that you'd find in Camaros of this vintage, and the horseshoe shifter now manages four gears instead of just three. Auto Meter gauges, including a Monster Tach mounted on the center console, keep a close eye on the thundering big block up front. Somewhere along the line, an AM/FM/cassette stereo was added, along with a pair of 6x9 speakers on the rear package shelf. The trunk is finished in the same bright red paint, so you know the paint job was thorough, and carries a mat and full-sized spare tire that might have been borrowed from an '80s Camaro.

But the real story here is under that cowl-induction hood. In 1972, there was simply nothing on the road that could compete with this 502 cubic inch V8's 440 horsepower and 515 pounds of torque. In application, this car accelerates like it is attached to a giant recoiling rubber band, and with seemingly endless reserves of torque, it feels like it could pull forever. It looks pretty sinister, too, sitting in the satin black engine bay with its wrinkle-finish valve covers and black air cleaner. Power enhancements include a Holley 750 double-pumper, aluminum intake, and ceramic-coated long-tube headers feeding a 2.50 inch exhaust system with Flowmaster mufflers. The 700R4 4-speed automatic overdrive allows this brute to just loaf along on the highway, even with the 3.73 gears in the 12-bolt out back, and yes, there's a Posi inside. Chrome American Racing wheels with 235/60/15 front and 275/60/15 rear tires give it just the right rake to look menacing.

Nicely built from a super-solid car, this is a Chevelle that's easy to love. Big in everything it does, it's the cruise night special you've always hoped to own. Call today! 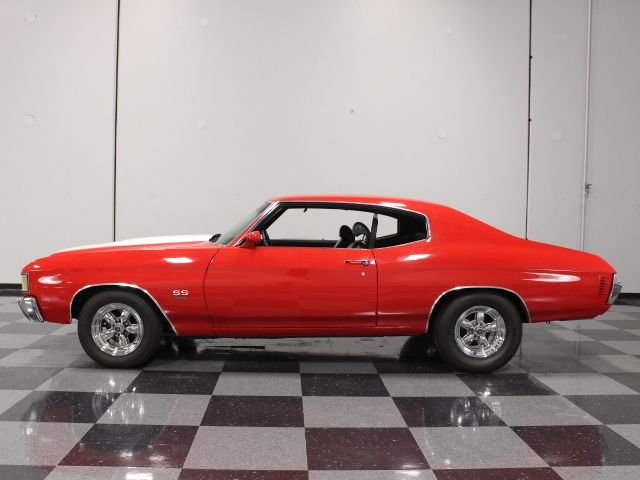