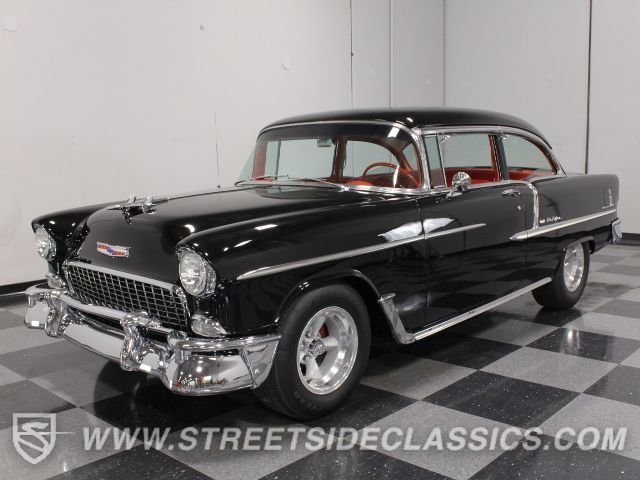 If you want a 1955 Chevy that's merely a nice cruiser, we have plenty of those. But if you want one that can actually move like a modern muscle car, well, then this stunning black 2-door is your best choice. Packing a 425 horsepower small block, a 6-speed manual gearbox, and an awesome color combination, this is the Shoebox that will make you want to get out and drive!

Onyx Black always looks great-well not always, but when the bodywork is as laser-straight as this car's, then there's simply nothing better, and yes, it's this car's original color. The simplicity of the '55 Chevy's look was really it's biggest selling feature, and today it remains a favorite among restorers and customizers for that very reason. This one looks custom while wearing all its original trim and given the incredible amounts of information available on these cars, there's just no excuse for not making it spectacular. As a result, the doors fit beautifully, the hood is centered between the fenders with even gaps all around, and the trim lines up so neatly that it was surely done with a ruler. The modern urethane paint has a depth and shine that adds to the hot-rod look and will remain this bright for years to come given only modest care. And after spending thousands of dollars on chrome, this car glitters like a show piece with all the factory jewelry intact, including 1-piece California bumpers.

I don't think I'm alone when I say that black cars with red interiors are about as good as it gets, but this car takes it a step further with a two-tone setup that's both trick and traditional. The red definitely makes the statement you expect, but with tan cloth seating surfaces, this interior looks straight out of 1955 and remains supremely comfortable for long hauls. Factory gauges were fully restored and stuffed back into the restored instrument panel, but there's a comprehensive array of modern Auto Meter instruments hanging underneath, including a supplemental speedo and tach. A/C has been discreetly fitted, making this Chevy daily-driver comfortable and the original wheel lives atop a tilt column that looks very stock. Impressive, right? Modern internals in the original radio ensure a vintage look with modern AM/FM capability, and the trunk is restored to stock specs, right down to the bias-ply whitewall spare.

The engine is a 350 cubic inch crate motor with a long list of performance upgrades. Up top, there's Demon carb under a trick Holley air cleaner, and it's all dressed in plenty of polished aluminum. A billet serpentine belt drive system manages the accessories, and with headers and a 3-inch Flowmaster exhaust system, it sounds wicked while belting out an estimated 425 horsepower. It's backed by a slick-shifting Richmond 6-speed manual gearbox that's a joy to row through the gates, and with disc brakes, coil-over shocks, and tubular front A-arms with rack-and-pinion steering, it moves like a late-model Camaro, not a 60-year-old classic. The rear is a grossly over-built Dana 60, which ensures that you'll never break any critical parts, even with sticky Goodyears wrapped around vintage 15-inch Torque Thrusts.

This is an exceptional car that nails every hot-button an enthusiast could want: big power, a shift-it-yourself transmission, capable suspension, and looks to make grown men weak in the knees. Call today! 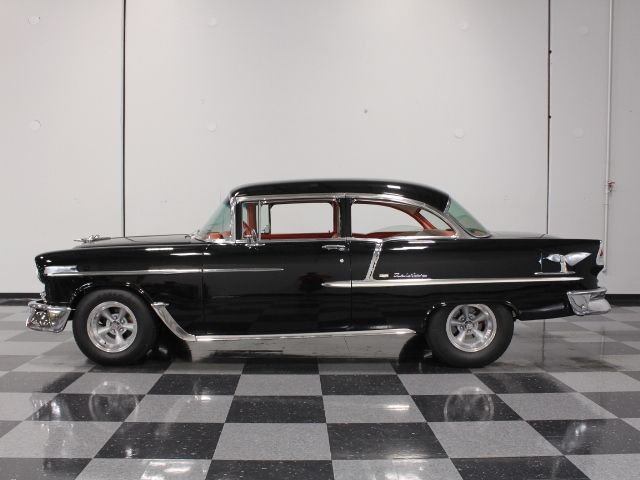