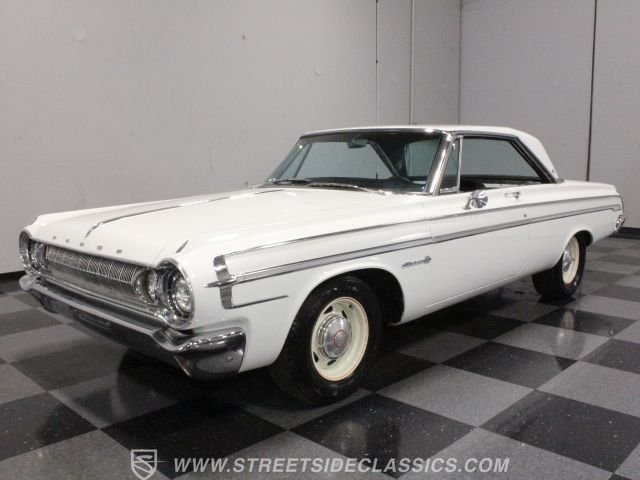 Back in the early '60s, you could buy a turn-key racecar from your local Dodge dealer, and it would look a lot like this 1964 Polara hardtop. Of course, the full-race machines were incredibly rare, but the guys who knew their hardware also knew that when they saw a car that looked like this industrial-strength Mopar, they should probably steer well clear of it lest they get badly hurt.

Built as a tribute to those incredible turn-key racers, this no-nonsense Polara has the bare-knuckle street fighter look that screams high performance in a very low-key way. The bodywork is straight, not unlike what it would have been when it rolled out of the factory, and it shows off the work of guys who knew their stuff, but they didn't have to work very hard since this was a clean, dry car with no major issues to handle. There's just a single repaint in the original white, so you know it's led a good life. Chrysler's turbine look was in fashion in 1964, and they retained all the chrome and stainless trim on this one to enhance the sleeper look. To guys who know what they're looking at, this car is gorgeous. As for everyone else, well, don't say we didn't warn you.

Just because it was built to pound the pavement doesn't mean it wasn't also comfortable and stylish inside. With big-car comfort and sporty twin buckets flanking a stock center console, it balances just the right amount of flash with no-nonsense attitude. The interior is mostly new save for the dash pad, which is a nicely preserved original piece that's only just now starting to show its age. The gauges are original and in outstanding condition, but for a car with this much invested under the hood, it's important to keep a keen eye on it, so auxiliary gauges were added under the dash flanking a trick tach mounted in the console. A fat steering wheel gives away part of the illusion, but by the time anyone notices it'll be too late anyway. For effect, it retains the original AM radio, and there's even a full-sized spare in the trunk to help with ballast.

The engine is a 1969-vintage 440 with an .030 overbore and 10.5:1 slugs, so it'll run well on pump gas. The bottom end is heavy-duty stuff from a 440 Six-Pack, and the heads are unmolested '63 Max Wedge pieces fed by a polished '63 intake with modern Carter 750s on top. Reliability upgrades like a Holley "blue" pump, a big aluminum radiator, and twin electric fans mean it'll cruise effortlessly, and a Milodon external oil system keeps it all safe. Big tube Hedman headers dump into a 2.5-inch exhaust system with turbo-style mufflers, and you'd better believe this sucker sounds nasty. A built 727 Torqueflite 3-speed automatic with a shift kit and a 2800 RPM stall converter feeds a 1968 8.75-inch rear full of 3.91 gears on a Sure-Grip limited slip. Front disc brakes hide behind those mild-mannered steel wheels, which wear 215/70/15 front and fat 275/60/15 rear performance radials.

They say that beauty is in the eyes of the beholder, but this one is beautiful to the guy holding the time slips. A great cruiser that still has the moves. Call today! 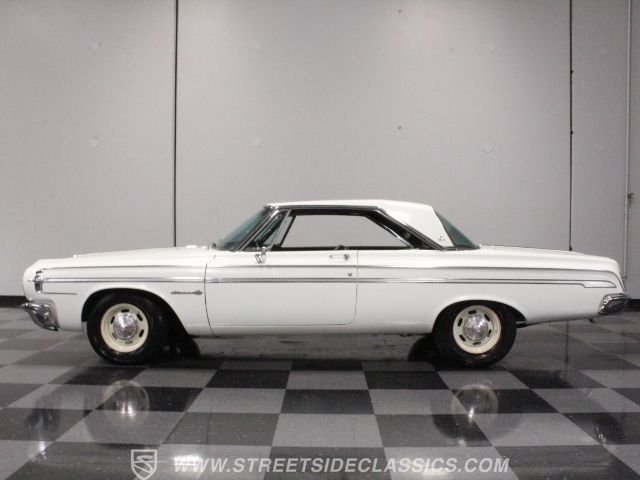