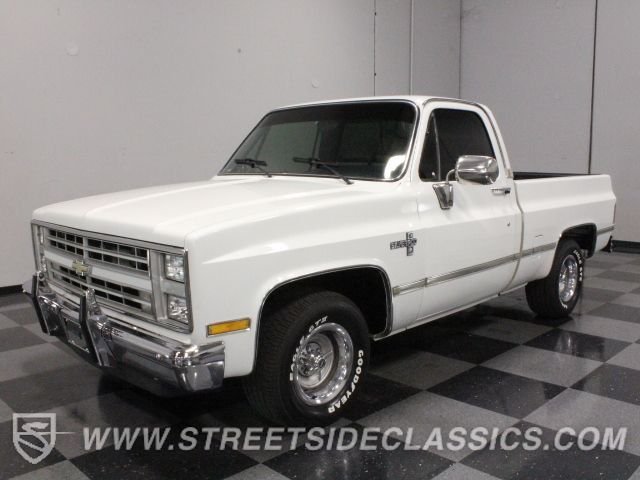 We get a lot of these clean mid-80s Chevy pickups, and they're always pleasant, clean machines. But every so often, one like this 1986 C10 shows up and sets the bar at a new level. This one is every bit as clean and functional as the others, but it packs a snarling aluminum-headed 383-inch crate motor under the hood that makes more muscle car than utilitarian hauler.

This this C10 looks downright spectacular in its original Frost White livery. Maybe it's the way the dark tinted windows contrast with the icy white paint, but it looks aggressive and clean all at once. It's pretty obvious that this one has been personal transportation since it was new, especially as a regular cab/short bed model, and most of its hauling was probably limited to personal gear and helping friends move. As a result, its bodywork is clean, smooth, and straight, with a great shine that still stands out nearly thirty years later (wow, has it been that long?). All the original trim remains in place, too, so this isn't some custom piece of questionable taste, and nobody will know anything about it beyond what you want to show. Bright chrome bumpers enhance the stock look, and it does carry a bed liner just in case you still want to use it as a truck. The only possible tipoff that something isn't quite normal might be that subtle '383' badge on the tailgate, which is actually pretty trick. By the time anyone notices, it's already too late.

The stock bench seat interior gives nothing away, either. That's original upholstery on the seat, factory carpets underneath, and nicely preserved door panels on both sides. This C10 was loaded with options when it left the dealer's lot back in 1986, so it makes the perfect foundation for the ultimate hauler. A/C, power windows and locks, a tilt column, and a sliding rear window all make it a pleasure to drive even when you're not using that 383 to its full potential. Heck, this one sticks to its sleeper persona so well that the original AM/FM stereo radio is still in the middle of the dash!

All that's pretty nice, but the thing that got our attention with this one is the 383 cubic inch V8 under the hood. Complete with heavy-duty hardware like aluminum heads, a Holley Street Avenger carburetor, and ceramic-coated long-tube headers, it runs like it's 800 pounds lighter than it is. It looks fairly stock, which is entirely the point, but the tall open-element air cleaner and chrome Chevrolet valve covers tend to show off a bit. However, other gear looks bone stock, like the accessory drive, A/C system, and other ancillary systems. A TH350 3-speed automatic works hard behind the stroker motor, sending power aft to the original 10-bolt rear end. The exhaust system uses Flowmasters with turn-downs just ahead of the rear axle, so the soundtrack might give things away, but you can't argue with the spectacular sound. Original Rally wheels with fat 275/60/15 Goodyears and spinners retain the stock look with a little something extra.

Nice truck? Absolutely. But if you're looking for something a little beyond merely "nice" then this C10 is what you've been looking for. Call today! 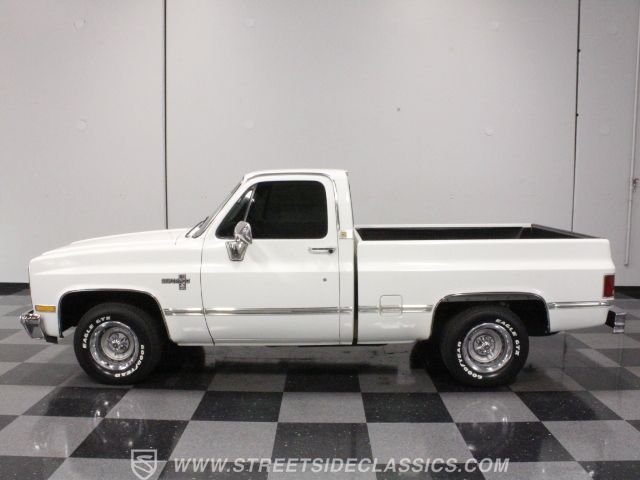