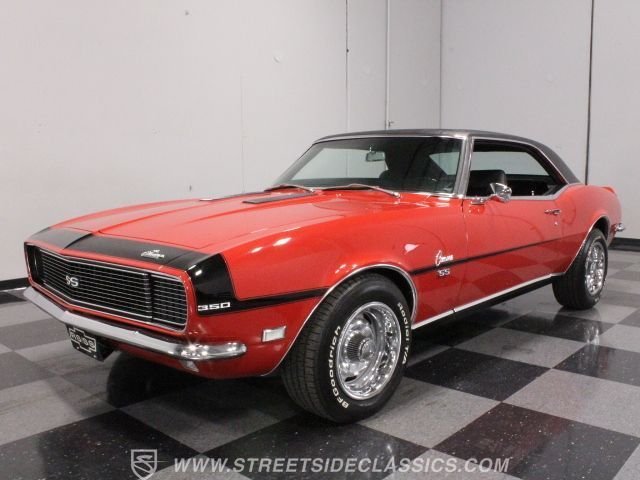 This is one of those Camaros that demands a closer look. Not only does it carry its original engine, but it's loaded with luxury options like A/C and power windows, all wrapped in a gorgeous RS/SS package that's totally correct. Oh, and I should mention the upgrades underneath that also make it wicked fun to drive.

You know this is a special car just at first glance. Complete with SS hardware and RS style, it's the ideal combination of rare options that make for a unique F-body. With a rotisserie restoration that was completed last year, it has been driven less than 300 miles and still looks extremely fresh and beautifully restored. Matador Red sizzles on the expertly refinished bodywork, which is far better than it was originally and is only possible with the infusion of massive sums of cash. They kept to the factory specs, so that means a stock hood with blacked-out inserts, a ducktail spoiler, and a beautiful black vinyl top, all of which work beautifully with the black stripes streaking down its flanks. The headlight doors are upgraded with electric motors to replace the trouble-prone vacuum units and all the chrome is so bright that you'll want to carry a rag with you to keep it spotless.

The deluxe houndstooth interior is beautifully finished and shows off this particular Camaro's luxury/performance mission. The seats, of course, are freshly upholstered with correct seat covers, the carpets are new, the door panels are neatly finished and come complete with power windows, a seldom-seen option in early F-bodies. The original gauges are in place, including the console-mounted clock, and there is a second set of digital instruments stashed in the glove box. The horseshoe shifter originally controlled a 2-speed PowerGlide, but now offers the correct quadrant for the TH350 3-speed automatic that now lives underneath. As I mentioned, this car also includes goodies like factory A/C, an AM/FM stereo radio with four speakers, head rests, tinted glass, and an unusual fold-down rear seat among others. This is quite likely the most heavily-optioned 1968 Camaro you're likely to see, and everything has been restored to factory condition or better.

The engine is the original numbers-matching L48 350, which was rated a 295 horsepower and was standard equipment in the SS. It has been fully rebuilt with an .030 overbore, Pertronix ignition system, and a few other invisible tricks, but otherwise it runs and drives like the finest 1968 Camaro around. It has been neatly detailed with Chevy Orange paint on the block, chrome valve covers, and a correct air cleaner assembly. The A/C has been upgraded to R134a refrigerant and the aforementioned TH350 transmission powers the 12-bolt rear. The suspension now uses Hotchkiss pieces to give it laser-sharp handling, along with a set of Bilstein shocks. Long tube headers and a dual exhaust system with Flowmasters replace the original "deep tone" mufflers, and the undercarriage shows off the details that only a rotisserie restoration can achieve. Factory-correct Rally's are fitted with 225/60/15 BFGoodrich radials that give it the perfect stance.

Beautifully finished, this is an unusual, fast, fun Camaro that will get all the numbers guys excited. Call today! 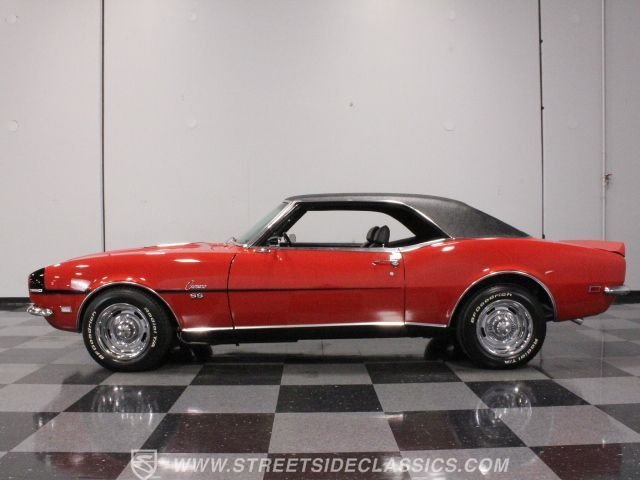