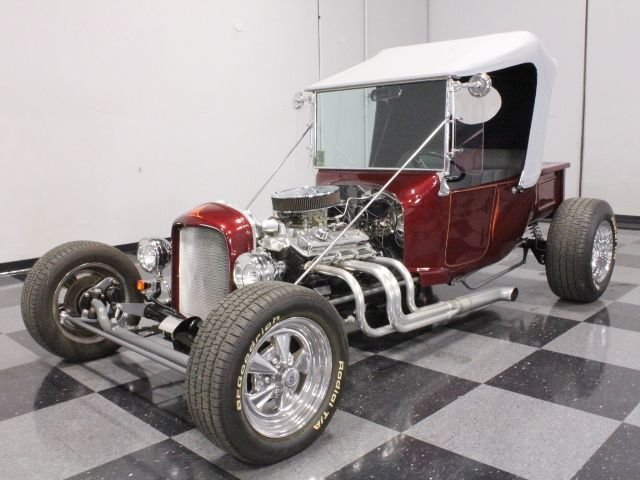 A lot of folks thought the day of the T-bucket was over, but recent strong sales-we've sold two in the past month-suggest that everything old is new again. This particular T-bucket nails the look and the feel, combining the classic truncated Model T pickup body with a thundering V8 powerplant up front.

If you're doing a T-bucket, you need to go full retro with it. That means metallic paint, wild and wacky pinstripes, and a top that looks like it was penned by the Ratfink himself. All the T-buckets are fiberglass these days, but this one carries a twist: a passenger-side door that makes entry and exit a bit more graceful, particularly with the top in place. Finish quality is quite nice, and you really can't tell it's fantastic plastic until you knock your knuckles on it, and it captures all the detailing that the Model T offered, from the framed "tailgate" to the outline of a door on the driver's side as well. The burgundy paint is perhaps the most subtle element of the entire car, but the accents in bright orange, including pinstripes and Ford script on the tail give it that wild look T-buckets are famous for. '39 Ford teardrop taillights, a cut-down '32 Ford radiator shell, and King Bee headlights are all traditional pieces of the formula, but each car still seems to look different from the others, including this one.

The interior is simple, but you'll probably appreciate the gray cloth upholstery when you're out for a cruise, because A/C is not available in a T-bucket. Strictly a 2-seater, the bench is neatly divided into a pair of neo-buckets whose sides blend into the side panels of the body. The upright steering column that is part of the T-bucket formula is topped by a leather-wrapped wheel, and bright white-faced Dolphin gauges are spread across the dash. That tall white convertible top is removable, creating the open-air T-bucket look, and the shrunken "bed" out back houses the gas tank. There's no radio, no heater, and, well, nothing but engine and the barest of minimums to operate it, and that's entirely the point.

The engine is a chromed 350 cubic inch Chevy small block that's as much as styling element as powerplant. Dominated by an Edelbrock 4-barrel carb and those outrageous headers and side pipes, the look is instantly identifiable and the sucker runs extremely well. Fully sorted, it starts easily, idles well, and is happy to trundle through traffic without overheating thanks to a beefy aluminum radiator stuffed into that cut-down radiator shell. It's backed by a TH350 3-speed automatic and a Ford 9-inch rear, which hangs from a 4-link and a set of coil-overs. Up front, the traditional dropped axle is one of the coolest features, since you can watch it working from the driver's seat. There's also a disc brake at all four corners, so it has impressive stopping power. And while many T-buckets push the limits of tire, this one wears reasonably-sized BFG radials that still give it the traditional big-n-little look.

Is the T-bucket back? Given how easily they sell, there's clearly a large group of guys out there who still think they're cool. If you're one of them, give us a call today! 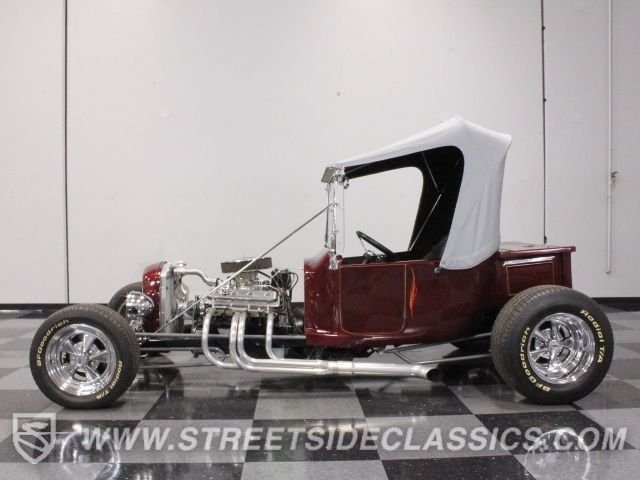