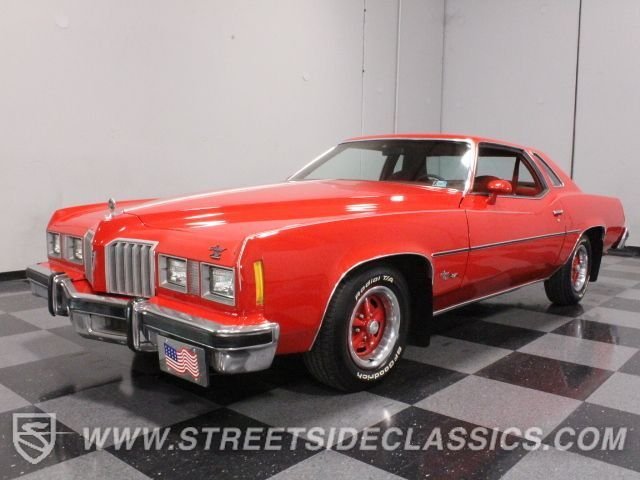 In the 1970s, if you wanted a little performance with your luxury (or was it luxury with your performance?) then Pontiac was where you shopped. This 1977 Pontiac Grand Prix is a great example of the car that neatly combined the same 400 cubic inch V8 found in the Trans Am with the luxury features of a Buick, and wrapped it all in some of the best styling of the decade.

Unlike many of its corporate cousins, the Pontiac Grand Prix didn't seem to get clumsy-looking as the decade wore on. Instead, the handsome long nose/short deck profile continued to be a big seller, and with dramatic elements like the V-shaped grille and steeply sloping rear window, it looked fast. The eyeball-watering bright red paint makes this one far from a subtle luxury cruiser, but it highlights why these cars were popular then and will likely become desirable collectors' items in the future. Note the sweeping front fender line that continues to just about where the driver sits, then kicks up again to finish out the quarter panel. That's a line that's been alive since the early days of sports cars and put to great use by GM in so many products. It looks awesome and gives lithe proportions to even a big car like the Grand Prix. Great paint certainly helps, with a shine that does the red paint justice and a set of white pinstripes to highlight the car's best features. Chrome was still a big feature in 1977, and the bumpers, trim, and lenses are this Poncho all look great.

Sure, the bright red interior is pure disco-era flash, but Pontiac fans will recognize those buckets that are the same ones found in the Trans Am, albeit with plush velour upholstery. The gauges are exceptionally cool round units in a wrap-around instrument panel, flanked by round A/C vents that complete the racy look. The steering wheel is original and showing its age, but otherwise the interior is in remarkably good shape, including carpets and door panels. The center console houses the shifter and a discreetly hidden temperature gauge down low, and just above you'll appreciate a newer AM/FM/CD stereo head unit that sounds great. This car's originality is perhaps most visible in the trunk where it shows factory undercoating, original paint, clean panels, and carries a spare Rally II wheel.

A 400 cubic inch V8 was optional on the Grand Prix, and with this one now fortified with an Edelbrock intake and a 4-barrel carburetor, it runs like a big Trans Am. The engine bay isn't detailed for show or anything like that, but there are no trouble spots and the engine runs smoothly with impressive torque at almost any speed. A new alternator, fresh plug wires, and an A/C system upgraded to R134a refrigerant suggest that someone took great care of this car. It moves with a TH400 3-speed automatic and a 10-bolt rear, and the dual exhaust system has that muted muscular tone that suits the Grand Prix just fine. Color-matched Rally II wheels look great and wear 225/70/15 BFGoodrich radials.

Complete with receipts and some original documentation, this Grand Prix is affordable vintage fun with decent performance and dynamite looks. Call today! 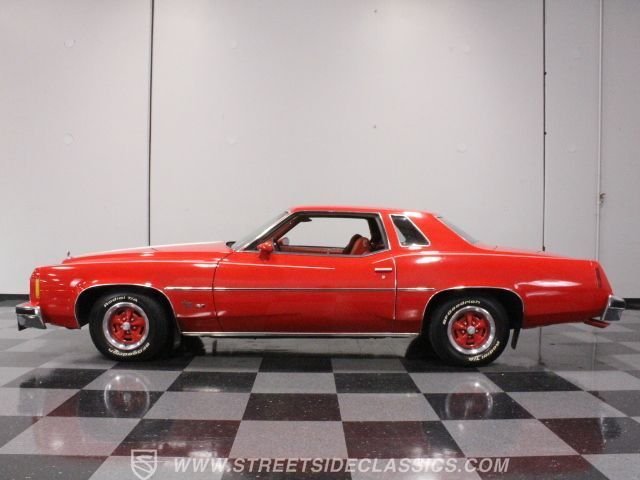