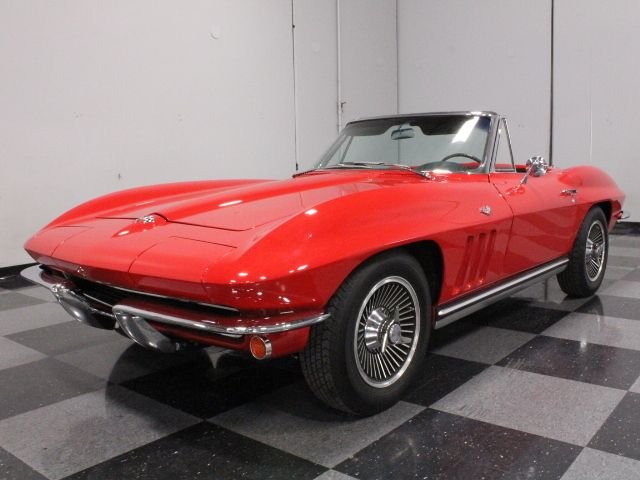 1965 Corvettes are perhaps the biggest bargain of the mid-year period. They're not iconic '63s, yet they have all the upgrades that came in '65, most notably 4-wheel disc brakes, and with a small block rebuilt to L79 specs, this one can pretty much run with the big dogs that would come a few years later. Obviously, if you like driving your Corvette, this car represents tremendous bang for the buck.

If you drive any mid-year Corvette, especially a Rally Red roadster, you're going to get noticed. Subject to an exhaustive cosmetic and mechanical restoration, this one remains in excellent condition that's well above what most folks consider a "driver." The fiberglass prep was expertly done, and while to the judges a flawed Corvette is a perfect Corvette, this one has no such pretensions. The surface was sanded to near-perfection, the gaps were expertly aligned, and the finish is two-stage urethane that's smoother, deeper, and shinier than anything rolling out of the St. Louis plant in 1965. Just look at the vivid red paint, so bright and pure that it makes you want to touch it just to see if it's still wet. In addition, all the chrome was restored, the stainless spent some time with a buffing wheel, and the shiny rocker trim looks freshly minted.

The black interior was restored at the same time, and while the trim tag says STD, it's anything but ordinary. The seat covers are correct and these seats are some of the most inviting buckets I've seen in a long time-they're just begging you to slide behind the wheel, aren't they? The gauges have been beautifully rebuilt, and the markings are so crisp that I'm left wondering if they even looked that good when they were new. Fresh carpets and center console add to the factory-fresh feeling, and the door panels are wonderfully done. The radio is a rare AM/FM unit with that unique vertical orientation, and there's a woodgrained steering wheel as well. A bright white vinyl convertible top was installed at the same time and still looks quite good, although you'll probably never see it again after you get this car home.

The block is a 1967-vintage 327, rebuilt to snarling 350 horsepower L79 specifications. It certainly looks right under that chrome air cleaner and with a pair of gorgeous finned valve covers, and extra attention went towards things like the hoses, clamps, and other hardware. There's nothing like a cackling small block with a solid lifter camshaft, and just listening to this one idle is a treat, never mind winding it through the all four gears. Gorgeous ram's horn manifolds have obviously been coated to protect the cast iron and keep them looking good for years, and they feed a reproduction exhaust system. The Muncie M20 4-speed has been fully rebuilt, and out back a set of 3.36 gears make it street friendly no matter what you're doing. Four-wheel discs were new in '65 and much welcome given the car's performance, and it rides on pretty knock-off wheels with recent 205/70/14 blackwall radials.

Exhaustively restored to drive, this '65 Corvette has a lot of smart upgrades that make it a pleasure on the road and a stunner on the show field. Call today! 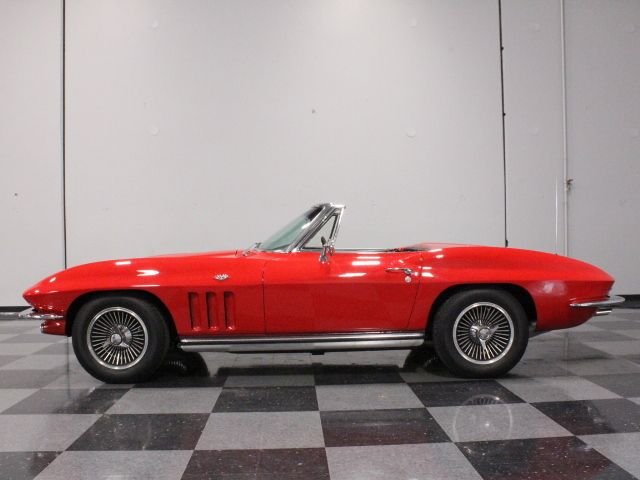