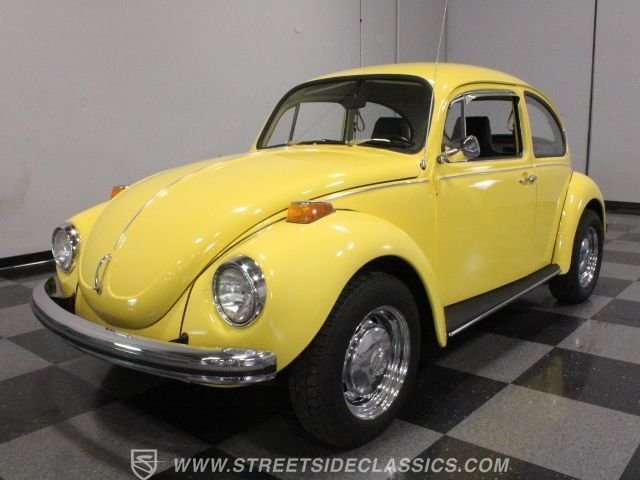 Is there anything the Volkswagen Beetle can't do? It's been everywhere and done everything, including, apparently, becoming a desirable collectable. This 1972 Super Beetle is ample evidence that the days of finding these for pennies on the dollar are long gone, and reminds us that the good ones always represent the best value.

Sunny yellow is a great choice for the personality-laden Beetle, and while they're no longer a staple on America's highways, they are still recognized instantly by everyone from tiny children to seniors. This is one of those great cars that effectively blurs the line between restored and original, and it's hard to say whether the paint is amazingly well preserved or just an older repaint. Either way, it has an honest patina to it, a gentle shine that looks right on the curvy old bodywork, and clear evidence that it's been loved. Sure, it's been driven, but what Beetle hasn't, and the overall look is quite appealing. VW fans will be pleased to see the old-style taillights that most prefer, as well as bright chrome bumpers, very nicely preserved rubber running boards (probably the last production car to use them), and just enough stainless trim to make it look right next to the flashy American iron. Just a clean, honest Beetle.

Basic black was the standard interior for the Beetle, and the high-back buckets wear correct woven vinyl seat covers that seem to wear like granite over the years. Door panels recall an earlier era with built-in map pockets, and the dash remains simple with just a single round speedometer and integral fuel level gauge. The 4-speed gear shift falls easily to hand, and within a few miles you'll have mastered it, vague gates notwithstanding. New window gaskets help it seal up well, although I'm pretty sure the stories of VWs being so tight that they would float in water are an exaggeration. A newer AM/FM/CD stereo has been stuffed into the dash, with a pair of 6x9 speakers on the rear package shelf, and those kooky "bug" floor mats work well with the car's bright disposition. The front-mounted trunk is neatly finished with no signs of water intrusion, and it'll still carry plenty of gear if you'd like to drive it every day.

Touch the starter button under the dash and the 1600 cc flat-four springs to life and sounds like a Beetle should. The engine bay is quite tidy, showing off careful maintenance and signs that someone really cared about keeping it in top condition. A single-barrel carburetor with a stock air cleaner is proof that it hasn't been modified like so many Beetles are, and all the heater ducts are still in place. Up front, there's a new steering box so it tracks well, and a front sway bar makes it feel nimble on the road. The floor pans are original but quite solid, just like the rest of the chassis, and it wears staggered 165R15 front and 205/65/15 rear tires that give it a sporty stance that looks great. 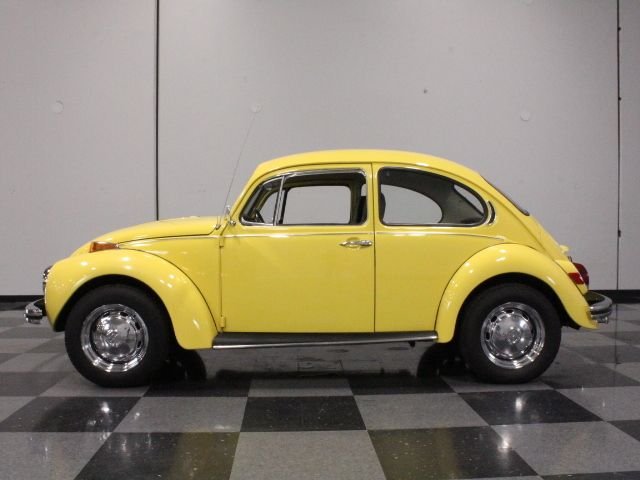