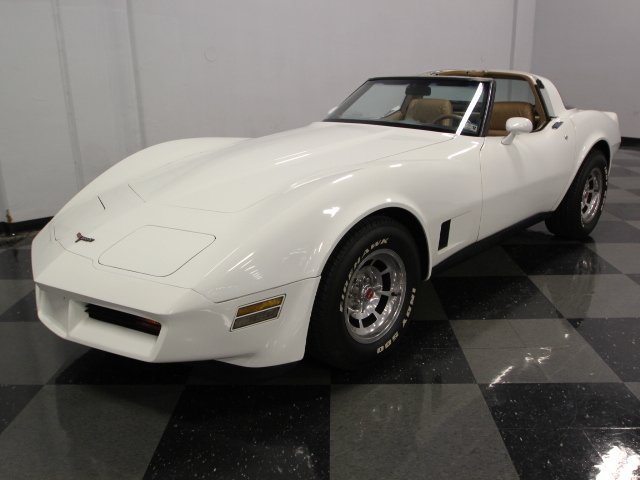 Get into the Corvette hobby for less than the price of a used Chevy sedan with this icy white 1981 coupe. With great original paint, a beautiful tan leather interior, and T-tops for the open air experience make this a great-looking summertime cruiser that you'll enjoy far more than the bargain price would suggest.

Yes, you saw that right, the white paint is original and the look will never go out of style and accents the C3's dramatic styling. Although 1981 was nearing the end of the line for the C3, it didn't diminish the iconic looks one bit, and even today these are some of the most distinctive Corvettes ever built. Everyone loves them. And when they look this good, falling in love is easy. Gaps are good, putting to bed the idea that these were not well-built cars, and the vintage enamel still has a decent surface with only some minor age cracks and no waves or ripples in the fiberglass. The hatchback profile greatly improved Corvette aerodynamics as well as the car's overall look, and it's enhanced by the modest ducktail spoiler that debuted in 1978. As is typical, the nose and tail aren't quite the same color as the rest of the body, but that's exactly the kind of thing Corvette purists look for and judges love to see where original cars are involved.

Based on the condition of the interior, this car could easily claim to be a decade or two younger than it is. The tan leather buckets show no damage and only light wear, extraordinary for 34 years of entertainment. With the T-tops off, you'll appreciate the light color, and it works very well to hide dirt, so it always looks great. Corvettes typically came loaded with options, and this one is no exception, carrying things like power brakes, power steering, power windows, power locks, a tilt wheel, cruise control, A/C, power driver's seat, and a rear defroster. The original AM/FM/cassette radio looks right at home in the original console, and it all works as it should. Nice!

The 350 cubic inch V8 under the hood is the original engine, and in 1981 the L81 was the only choice. Totally stock and dressed up with its stock chrome air cleaner led, the engine bay is nicely detailed, showing only light wear and no glaring issues. It's quite stock, with only signs of regular maintenance throughout, so you know it's been owned by responsible guys all along. Heck, even the exhaust system is quite stock, right down to the catalytic converter under the passenger's footwell, although the tailpipes and mufflers appear to be fairly recent. The TH350 3-speed automatic transmission snaps off shifts even more quickly today than when it was new and 1981 was also the first year for the fiberglass monoleaf spring, which not only improved chassis response, but shaved a considerable amount of weight. Four-wheel discs have been standard equipment since 1965, and the C3s featured some of the most powerful binders of the era. Machined aluminum wheels are just the right compliment to the white paint, and wear 255/60/15 Firestone radials.

A lot of receipts are included, which document the car's mileage and prove that it has been properly maintained all along. This 'Vette makes for a great way to get into the game without spending a fortune. Call today! 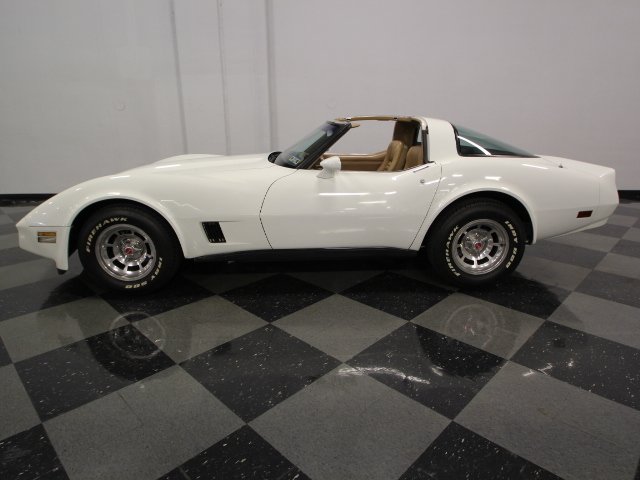