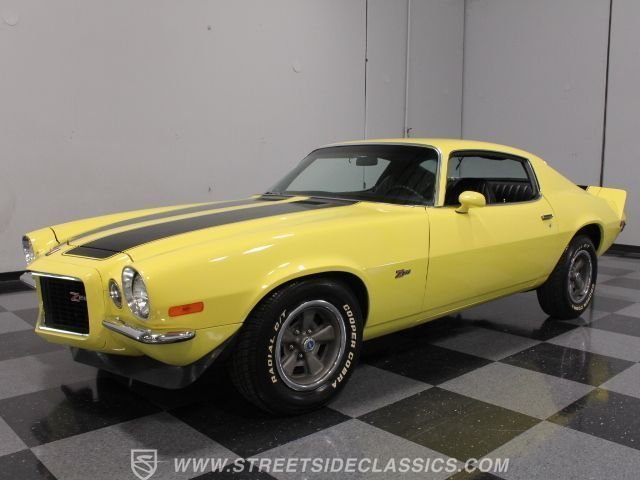 Despite tightening smog regulations, 1973 was a good year for Camaros, and this cool Z28 has a neat options list that makes it one of the more appealing second-generation F-bodies. In fact, it's a legitimate RS/Z28, making it somewhat rare for the guys who are into that sort of thing. And even if it weren't rare, it would still be a hot property with sizzling paint and a fantastic driver-oriented interior.

The biggest change in '73 was the addition of federally-mandated 2.5 MPH bumpers, and while that doesn't seem like a big deal, it meant that most Camaros that year got big, ugly reinforced bumpers that marred the otherwise slick design. But this car, with its RS package, kept the wide-open grille and smallish bumperettes, which were merely reinforced, and therefore retaining the classic good looks that make these cars so popular today. The cowl tag says this was originally a dark brown car, so we can't blame the restorer for picking more appropriate Daytona Yellow, then adding black SS stripes, which results in one of the best-looking '70s F-bodies we've seen in a long time. It retains its blacked-out Z28 grille, chin and decklid spoilers, and emblems, and surrounds them with nice, straight bodywork and a deep shine. There's not a lot of chrome, but the front bumperettes, the rear bumper, and the stainless window surrounds are all in excellent shape.

Those black bucket seats are every bit as comfortable as they look, and they feature fresh seat covers to match the door panels and replacement carpets underfoot. The wrap-around instrument panel gives the driver an array of bright analog gauges, along with a set of mechanical oil pressure and water temperature gauges ahead of the shifter, kind of a nod to Z/28s of the past. What's more, this is a genuine 4-speed Z, complete with Hurst cue ball shifter and center console, which makes the most of the engine's power. The cool NK4 steering wheel became standard equipment in 1973 and the original AM/FM radio remains in the dash. In back, you'll find a clean trunk that demonstrates none of the usual warning signs you see in cars that have seen the snow-this one is nice and solid.

While emissions regulations were strangling most engines, the 1973 Z28 did quite well, offering a stout 245 horsepower and 280 pounds of torque, sizable increases over the L48 under it. Dressed in Chevy Orange with gorgeous finned aluminum valve covers from an early Z/28, it looks the part of a muscle car powerplant and runs every bit as well as you'd hope. The aforementioned 4-speed gearbox is a great traveling companion when you're running hard, and the stock 3.73 gears out back give this Z some serious snap out of the corner. With a beautifully detailed undercarriage, including red oxide floors, fresh lines and hoses, and authentic-looking finishes throughout, you know this wasn't some quickie restoration. Original five-spoke wheels are some of the best looking of the period and now wear 255/70/15 white letter radials.

A neat car with an unusual package of options, all wrapped in a fantastic Daytona Yellow wrapper, and it's also a joy to drive. Call today! 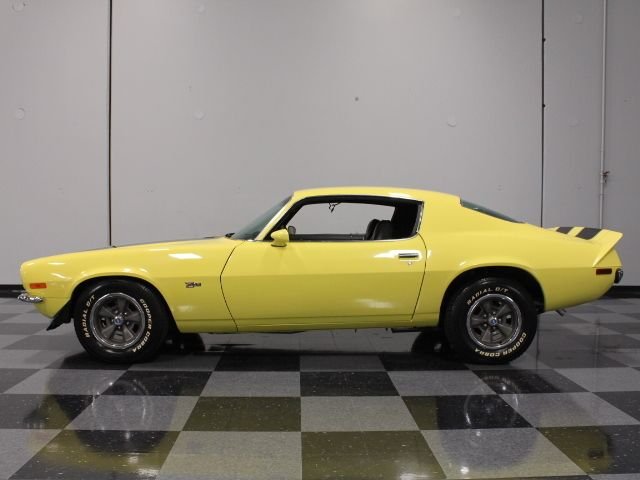