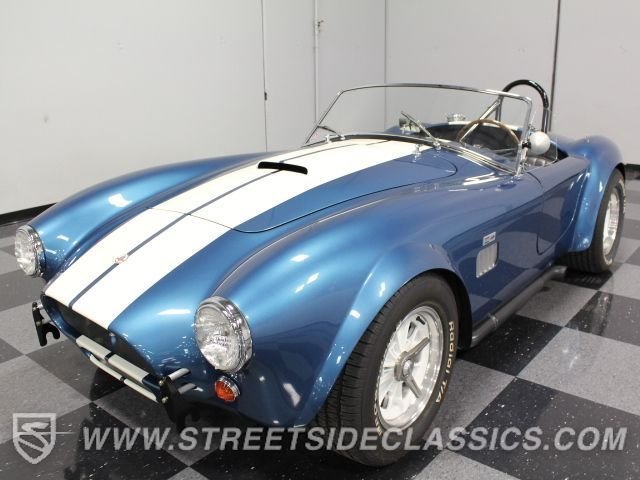 The cool thing about Cobra replicas is that you can build them any way you want, even if itпїЅs to build them the way Shelby built them nearly fifty years ago. This awesome Cobra replicates the FIA 289 Competition Cobra with a ton of historically accurate details throughout.

Built to emulate the 1965 Goodwood Tourist Trophy winning #21 Cobra, this isnпїЅt your same-old, same-old. The paint is Guardsman Blue with Wimbledon White stripes, as original, but the workmanship is simply fantastic. Seriously, no original aluminum Cobra ever looked this good sitting in OlпїЅ ShelпїЅs Los Angeles workshop, and the details on the Unique Motorcars 289 bodywork are quite accurate. Proportions are right, it has jacking tabs fore and aft, and even the unique пїЅcornersпїЅ on the trunk lid designed to clear the пїЅsuitcaseпїЅ that the FIA used to classify what they considered a production car, which included a trunk. Pretty cool, huh? Build quality is first rate throughout, and it shows very few signs of having been driven, although itпїЅs easy to see how it would be hard to resist.

The first thing you notice inside is the unique competition roll bar which goes forward, not backwards as on the street Cobras. Then thereпїЅs the correct FIA dash with Stewart-Warner gauges, including a speedometer wayпїЅoverпїЅthere on the passengerпїЅs side, just as it was in 1965. The seats are black leather and those 5-point harnesses were custom stitched with COBRA lettering just for this car. ThereпїЅs also a proper Raydot mirror, as well as the usual safety apparatus like a fire extinguisher and battery cut-off. A correct AC wooden steering wheel manages the helm, and that forward-canted shifter (which was actually a Mustang piece) controls an authentic Toploader 4-speed.

Where the original used a race-prepped 289, this one carries a 396 cubic inch 351W stroker motor, which generates big-block twist in a small-block package. Dressed to emulate the original 289, it features upgrades like Edelbrock aluminum heads, a Weiand intake with Demon carburetor, a solid lifter cam for that authentic sound, and ceramic coated black headers and side pipes. ThereпїЅs also a massive Griffin radiator up front cooled by a SPAL electric fan, March pulleys, aluminum heat shields, and Cobra valve covers. The box-section chassis offers Carrera coil-overs at all four corners, including quad shocks out back for the fully independent rear suspension. Girling inboard disc brakes are a cool feature that notably improve performance, and are complimented by a set of massive Wilwoods up front, so braking is never a worry in this car. Rack-and-pinion steering is probably an upgrade original Cobra owners yearn to have, making this a car you can dance with all day and never grow tired of its moves. Custom-painted pin-drive Trigo knockoff wheels, 15x8s up front and 15x9s out back, accurately replicate the racecarпїЅs rolling stock and wear 245/60/15 and 295/50/15 BFGoodrich T/A radials, respectively.

If you appreciate period accuracy and the performance of a hot small block, this is the ultimate Cobra. Call today! 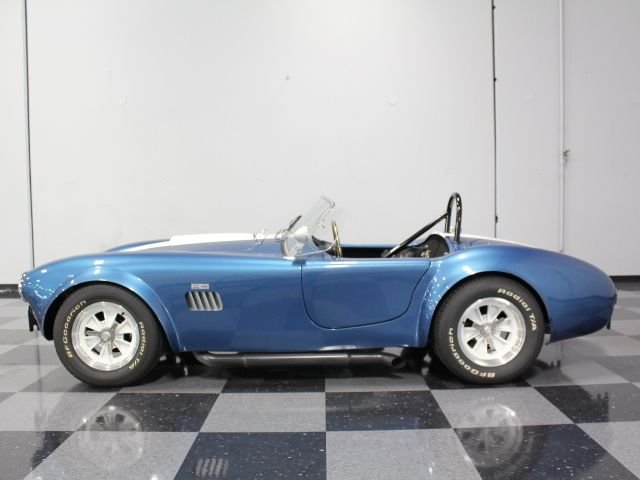