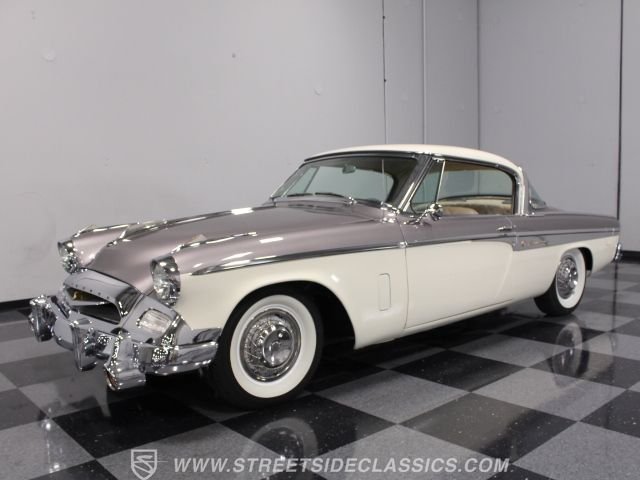 The Studebaker President Speedster was a halo car, designed to drum up interest in the entire Studebaker lineup with its innovative features. Sold in relatively small numbers when it was new, today they're highly-sought collectables for just that reason. Everything was standard equipment, and they're easily recognized with their striking two-tone color schemes and gorgeous Raymond Loewy-designed bodywork.

This particular Speedster is far more than it appears on the surface. Yes, it has been restored to a very high level and looks simply stunning in person, but underneath it's a modern LS1 drivetrain that vastly out-performs the original 259 cubic inch unit by a wide margin. However, all the dazzling Speedster design elements remain, including the massive chrome bumper which probably cost as much as a used VW Beetle all by itself to restore. This one wears a relatively subtle Rose Pewter over Ivory, and in certain light there's a lavender tint to the paint that looks quite good on the '50s sheetmetal. Workmanship is outstanding, and on a car that was prone to rust when it was new, this one is virtually spotless, a tribute to both the workmanship and the car's preservation. And, of course, there's a ton of bright trim that is beautifully restored, including the quarter panel inserts, fender moldings, and all the window surrounds. It's really quite impressive.

The Speedster was presented as a driver's car, and the passenger compartment is one of the first truly driver-oriented interiors. With diamond-tufted leather and vinyl seats, an engine-turned dash full of highly legible gauges, and a low cowl, it was easy to see how this car influenced future designs. Remarkably, for a resto-mod, it's shockingly OEM inside and neatly finished to stock specs. Only the slightly smaller steering wheel and under-dash A/C unit give it away. The engine-turned dash is one of the rarest components of the Speedster, and one of the few unique parts on it, so finding one is both expensive and time-consuming. The original AM radio remains in the dash, the factory switches control the power windows, and overall it is expertly executed to fool all but the most astute Studebaker experts. Even the trunk carries an original-style mat and stock spare assembly.

It's only when you lift the low-profile hood that you discover why this Speedster is so, well, speedy. A Corvette-derived LS1 powerplant has been neatly stuffed between the fenders. With roughly twice the horsepower of the original, the car is a spectacular performer with modern reliability and comfort. Note the clever integration of the A/C compressor and alternator, heavy-duty cooling system, and intake. It's backed by a 4-speed automatic transmission, so high-speed cruising is effortless. The front suspension is all-new, with upper and lower A-arms and modern tube shocks, while the rear remains stock. Even the original wheels were retained and fitted with restored faux wire wheelcovers and modern 215/75/15 whitewall radials.

An extremely impressive effort, this Studebaker is an under-appreciated collector's item that can truly be driven anywhere. Call today! 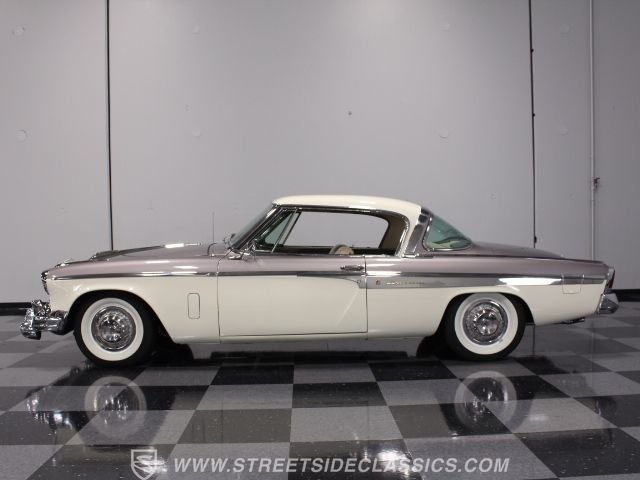