If you’ve been thinking about purchasing a new mid-engine C8 Corvette, you’re going to have to be a little patient. And if you’ve ever been at a red light with a Corvette owner, you know patience is not one of their virtues. As of March 2021, General Motors is no longer accepting new orders for the 2021 Corvette, effectively closing the books on the model year. It’s been reported that Chevrolet dealers will begin taking orders for the 2022 Corvette this summer, with early July as the tentative target date according to recent announcements. These delays beg the question – should you wait to buy the new C8 Corvette, or is an older Corvette model the smarter choice?

Before we start to unpack that question that’s on the mind of thousands of potential customers, let us spend a little time gushing about the totally redesigned C8. After all, we want to know what the hubbub is about, right?

The Corvette finally gets a mid-engine platform.  After decades of waiting, Zora Duntov’s dream of a Euro-style, performance-oriented Corvette has finally been realized. For those that don’t know, Mr. Duntov is largely known as the “Father of the Corvette”, with respect to Harley Earl as the sports car’s inventor. A Russian-born Belgian, Mr. Duntov came to the United States after WWII and went to work for GM as the Corvette’s first chief engineer, ushering in model after model of outstanding and iconic Corvettes. Through the years he helped usher in larger engine displacements, efficient fuel-injection systems, and innovative aerodynamic styling into the Corvette, yet he was always limited by GM’s persistence of a front-engine, rear-wheel drive set-up for the car. GM thought that’s all Americans would ever need, and that mid-engine cars were for Europeans and their curvy, windy roads. And unfortunately for him (and for us), they were mostly right as production numbers soared and sales increased practically every year. Never deterred, Mr. Duntov advocated for a mid-engine Corvette every chance he got, submitting an initial mid-engine test vehicle (the CERV I) as early as 1960, and developing several mid-engine Corvette prototypes for the company all the way up until his retirement in 1975. Alas, the “Father of the Corvette” never got to see his mid-engine baby go into production, but his vision never completely left the halls of General Motors as it faintly echoed for decades.

In 2019, the late Mr. Duntov’s dream finally came full circle with the introduction of the 2020 C8 Corvette. With a mid-engine platform and optimal weight distribution, a powerful naturally-aspirated 6.2L LT2 V8 mounted between the cabin and rear axle, and an 8-speed dual-clutch transmission, the C8 Corvette could now officially hang with European exotics across the pond. The driver-oriented, jet-inspired cockpit is much closer to the front nose than past Corvette models, giving the driver a “racecar-like view” of the road. Producing 495HP and 470 lb-ft of torque, the 0-60 times officially tested at a blistering 2.8 seconds, with a top speed of 194 MPH.  Acceleration, handling, and braking are all at true exotic car levels, and the aerodynamic styling and wild supercar looks make the C8 one of the slickest designs in the world today. And you could get all this with a base price under $60,000 for the standard model.

Even with this brief synopsis of the base-model C8, anyone can easily see why this car is so darn popular. Placeholders for the 2021 model were gone faster than dealers could write them, and the moment the 2022 models are allowed to be reserved again this summer, they’ll sell out faster than Aerosmith tickets in 1976. And just like you had to pay a scalper’s premium to get in on all that “Sweet Emotion”, be prepared to pay a dealer’s mark-up well over MSRP, as some have been reported to be as high as $25,000 over sticker.  High dollar example: 2020 Chevrolet Corvette 3LT Z51

As a leader in the classic car industry, Streetside Classics has sold pretty much every Corvette variation ever made, providing us with an expert-level knowledge of every generation. And since you’ve made it this far into this article, here’s a little industry secret: classic and second-hand Corvettes are incredibly underrated and one of the best deals money can buy. For years we’ve watched these models sell for bargain prices, providing incredible value to the buyers. The bottom line is, there is practically no better bang for your buck than a previously used Corvette. Nowhere else can you find this kind of styling, performance, and reliability across the board for such competitive list prices. Every generation has its high points:

Offered only in a convertible, these are often referred to as the “solid axle” cars that started America’s love affair with the Corvette. Mostly pursued by purists and collectors today, these are highly collectable Corvettes, known for easy cruising and high-dollar price tags. Harley Earl’s “Project Opel” fingerprints are all over the early single-headlight models, with Zora Duntov’s vision kicking in with the introduction of the V8 in the fresh-faced ‘56 models. Quad headlights took over in ’58, and the redesigned ‘61 and ‘62 ducktail C1s are the most sought-after for drivers today. High-dollar example: 1960 Chevrolet Corvette 283 V8 Fuel-Injection.

These “Mid-Year” models helped Corvette make the great leap into the performance motoring world with their mako shark-inspired design. 1963 brought us the first ever “Sting Ray”, a name widely used for generations to come, albeit without the space between the two words. A coupe was offered for the first time, with the rare “Split-Window” representing one of the most beautiful designs the automotive industry has ever seen. The C2 ushered in hidden headlights, big block V8 engines, 4-wheel disc brakes, independent rear suspensions, and also introduced the first Z06 competition package and Grand Sport models.  High-dollar example: 1963 Chevrolet Corvette Split-Window.

C3 Corvettes should technically be split into two groups: “Chrome Bumper” early examples from ’68-’72 (although 1973 did have a rear chrome bumper) and “Polyurethane Bumper” latter examples from ’73-’82. Inspired from the Mako Shark II design, this is the generation that brought Corvette to the middle and working class sections of the population. Today, the early cars are more valuable than the latter, and those chrome bumper ‘Vettes represent some of the best investments on the market for collectors and drivers alike. Like every American car from that time, the polyurethane bumper cars were mostly choked of high-performance by federal emissions regulations, but their curvaceous, windswept designs are stamped into the collective memory of all car lovers. And they’re still an absolute blast to drive. Incredible “bang for your buck” is found within this generation, referred to as “Stingrays” from 1969-76, although colloquially most people call every C3 a “Stingray”. High-dollar example: 1968 Chevrolet Corvette Tri-Power 427

First complete redesign since 1963, these are known as the “modern” Corvettes. After a 1-year hiatus in 1983, these 4th generation cars came roaring back with an aerodynamic design that still looks great today. Lots of value can be found in these years, and performance starts to really pick up in the latter part of the generation, especially in limited ZR-1 and Grand Sport models. High-dollar example: 1995 Chevrolet Corvette ZR-1

Another complete redesign that helped lift the declining sales of the previous generation. With these cars, Corvette makes a turn toward the exotic, with design breakthroughs centered around a lightweight chassis, reduced drag coefficient, and vastly improved dynamic handling. V8 motors get a significant bump in horsepower and torque, especially in Z06 and ZR-1 models. High-dollar example: 2004 Chevrolet Corvette Z06

More of a refinement than a redesign, the Corvette opens its eyes (no more pop-up headlights) and continues its encroachment into the land of exotics. Lots of very fast cars can be found here, and at very good value. These cars have huge power, improved handling, and feel much more luxurious inside than any of their predecessors.  2008 saw the introduction of the LS3 V8, which increased HP to 430HP over the previous LS2’s 400HP rating.  Special editions of this generation include the Z06 (2006-2013), Grand Sport (2010-2013), and the almighty ZR1 (2009-2013).  High-dollar example: 2010 Chevrolet Corvette ZR1

This generation is pretty much faster than anything else on the road. The redesign was initially planned for a mid-engine and rear engine platform (ultimately axed in the late stages because of high production costs), which is why the C7s look like modern supercars that could easily debut as brand-new cars today. Because the previous model Corvette was slowly becoming an “old man’s toy”, this generation jumped head-first into the land of the exotics in an effort to appeal to younger generations. The “Stingray” moniker was brought back, and the C7 sold like hot cakes based on its incredible performance alone. If you really want a C8 but don’t have the patience to wait, the C7 is the next best thing. An incredible car with incredible value, prices have dropped since the C8 was introduced, so a lightly used C7 is arguably the best value on the sports car market today. High-dollar example: 2019 Chevrolet Corvette Z06

They say variety is the spice of life, and that axiom is clearly evident across the multi-generations of the Chevrolet Corvette. Whether it’s a 1953 Corvette Blue Flame convertible or a 2022 Corvette 3LT coupe, and everything in between, every example of the Chevrolet Corvette is extra special in its very own way. The classic Corvettes are a thrill to drive and show-off, and their ever-increasing values represent a smart investment strategy for the shrewd collector. The middle-run, late ‘70s to early ‘90s Corvettes represent a great chance to get into the hobby for not a lot of cash, because nothing pays out more smiles for miles than a vintage Corvette. And the most recent generations represent a chance to buy an exotic car for a reasonable price, and to experience the thrill of a top-of-the-line performance and ultra-luxury for the price of a used Honda in most instances. There’s not a more versatile line of sports cars anywhere in the world, and all these different attributes are exactly why we’re seeing a steady incline in sales across the generations, coinciding with record dealer orders for the new C8 model.

Ultimately, there is no right answer to the question: should I wait for the new one or should I buy an older model? That all depends on you as the buyer, and how much patience you have. The good news is, you can do a little bit of everything, which is a trend we’re seeing more and more with our customers. Reserve the all-new 2022 C8 for the future, purchase a low-mileage C6 as your daily driver now, and buy a classic chrome bumper convertible for weekend car show adventures. Or just pick one, you’ll be a winner either way, the Chevrolet Corvette is just that special, and exactly why it’s our top volume selling car model across all of Streetside Classics. 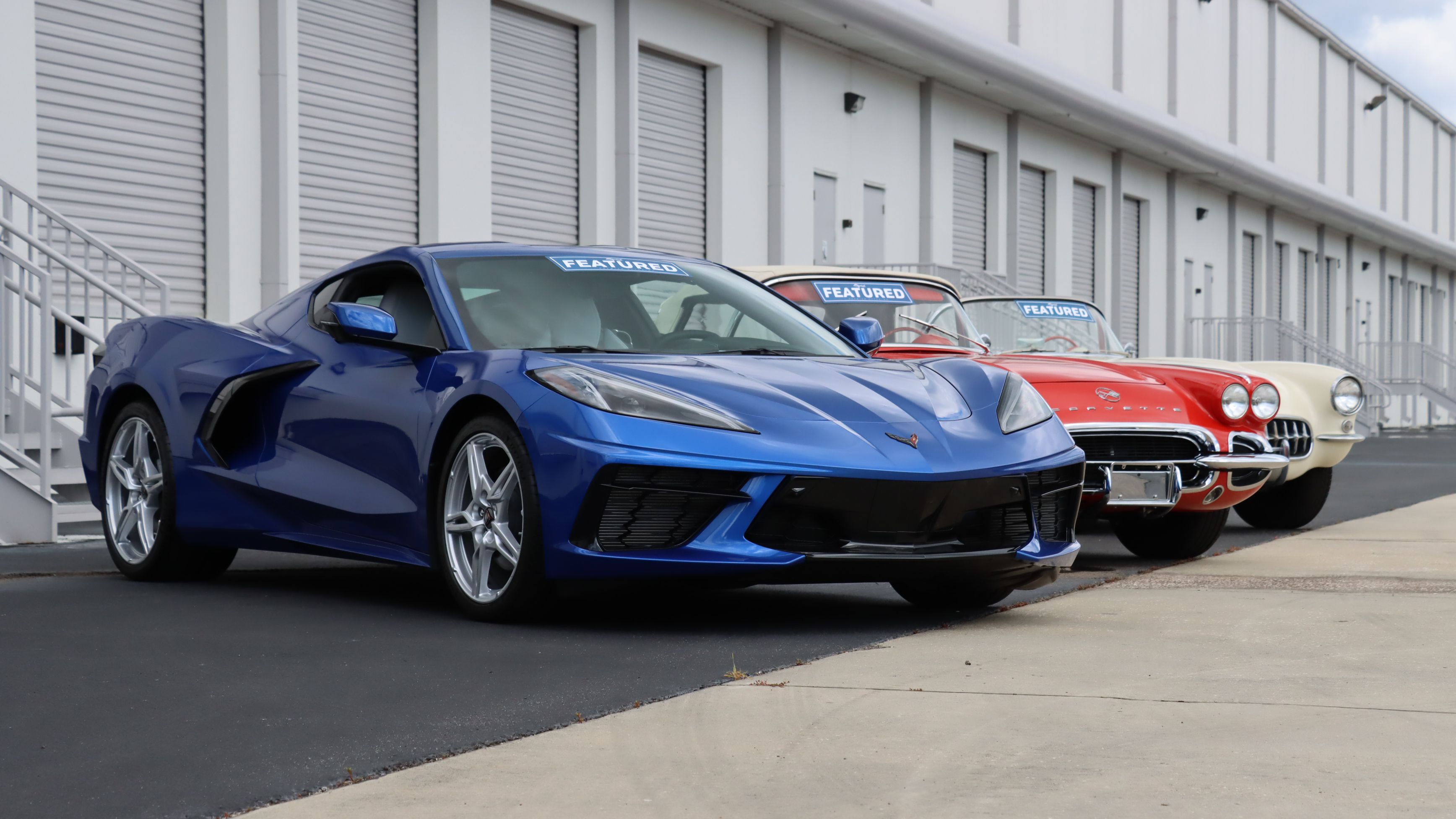